From the moment one enters Andaz West Hollywood smack bang in the middle of the Sunset Strip, greeted by a host who offers you a glass of wine whilst checking you in on a netbook, one just knows that this is going to be a relaxed stay. There’s no reception or bell boy here; just a very cool lounge and a laid back, anything goes vibe. 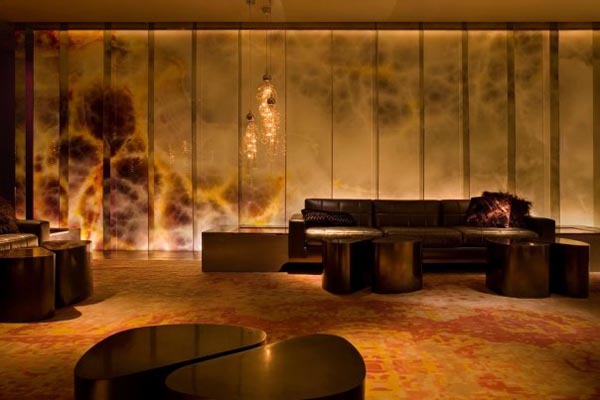 But this easygoing attitude shouldn’t come as a surprise knowing the history of the hotel. Rock n’ roll is embedded in the very fabric of the building. The hotel opened in 1963 as the Gene Autry Hotel before being sold in 1966. Its new incarnation was the Continental Hyatt House. During this legendary period, Jim Morrison was asked to leave after he was spotted hanging off a ledge by his fingertips, Led Zeppelin would rent as many as six floors, and Keith Richards famously tossed a TV out of a window. So it seems fitting that the end-of-tour party scene for the movie This is Spinal Tap was filmed on the rooftop. The hotel was lovingly nicknamed ‘The Riot House’ and ‘The Riot Hyatt’. And if you don’t believe me, take a look at this:

Even though we stayed at Andaz on Grammy night and the lobby buzzed with musicians and industry execs, there was no sign of any debauchery. In fact the corridors and rooms now have a tranquil feel.

Even so, I was a little worried that I may not get a decent night’s sleep (how un rock’n roll of me) due to my room’s location overlooking the neon dotted and very very noisy Strip, right opposite The House of Blues and yards away from the Mondrian’s Skybar. But thankfully, as a light sleeper, I’m happy to report the Andaz has industrial strength sound proofing.

Our room combined minimalist chic and classic lines in muted tones, and I especially loved the attention to detail and the various nods to music. There are old LP covers adorning the desk (one cleverly disguising the in room dining menu) and a beautiful coffee table book documenting the extraordinary nights that occurred at the nearby, almost mythical, Whisky a Go Go. Keeping its musical roots very much alive, Andaz recently partnered with The Roxy Theatre to launch Pillow Talk & Under the Covers Sessions; a monthly night of acoustic and rock.

Continuing the music theme, the hotel has also partnered with The Playlist Generation to create special DJ nights at the property, including the Wine Down Wednesdays DJ party and happy hour. Members of The Playlist Generation have toured the world as DJs and musicians with artists such as Kanye West, The Killers and The Cure. Andaz will debut spotlight DJ sessions in the lobby, restaurant and rooftop pool.

Aah, the rooftop pool; one of the extra special highlights of Andaz for me. The views – both by day and night – are simply staggering. All of LA has been rolled out before your very eyes: in front, the City of Angels spreads to the distant hazy skyscrapers of Downtown LA, behind is a pretty spectacular bird’s-eye view of the multi-million dollar real estate clustered around the canyons. This is the highest rooftop pool in LA and unlike some other hotels in the city, Andaz only allows its guests up to sample these dizzy heights, so it’s never crowded. And there’s definitely no TV throwing.

All images by Andaz West Hollywood.