What we love about Hyatt’s Andaz hotels, is that visually, they are all uniquely different. Recently we stayed at the Andaz West Hollywood (see our review here) which was a very cool hotel with a laid back, rock n’ roll vibe, overlooking the Sunset Strip. Andaz Liverpool Street is something quite different again. Situated in the heart of the city, minutes from London’s Liverpool Street station, the Andaz (formerly the Great Eastern hotel, built by Charles Barry Jnr, son of the architect of the Houses of Parliament ) was one of the original grand London railway hotels.

Its beautiful redbrick Victorian building dates back to 1884. But the differences are purely aesthetic, because as soon as you enter the lobby, the unique brand of Andaz hospitality kicks in: ultra stylish lobby, no reception desk, no queue; just incredibly attentive service from your host who will check you in on an iPad, whilst offering you a chilled complimentary beverage and a perch on an elegant sofa, providing what has to be the most relaxing check-in, ever. 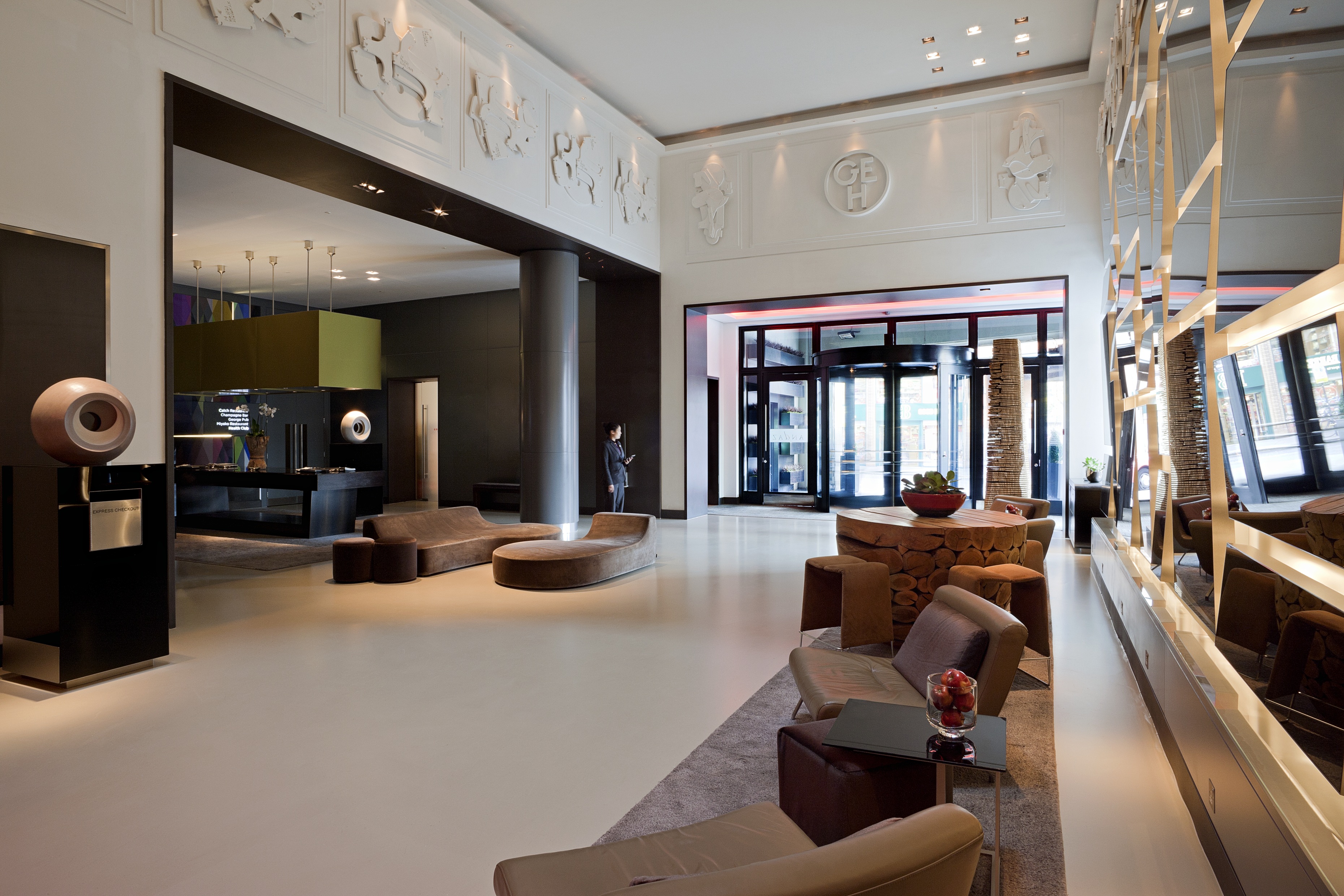 We stayed in a large suite which managed to be cosy, spacious and stylish all at the same time. The design was very understated in muted, restful shades with an occasional splash of red for added drama, complete with Eames chairs and Jacob Jacobsen lamps. 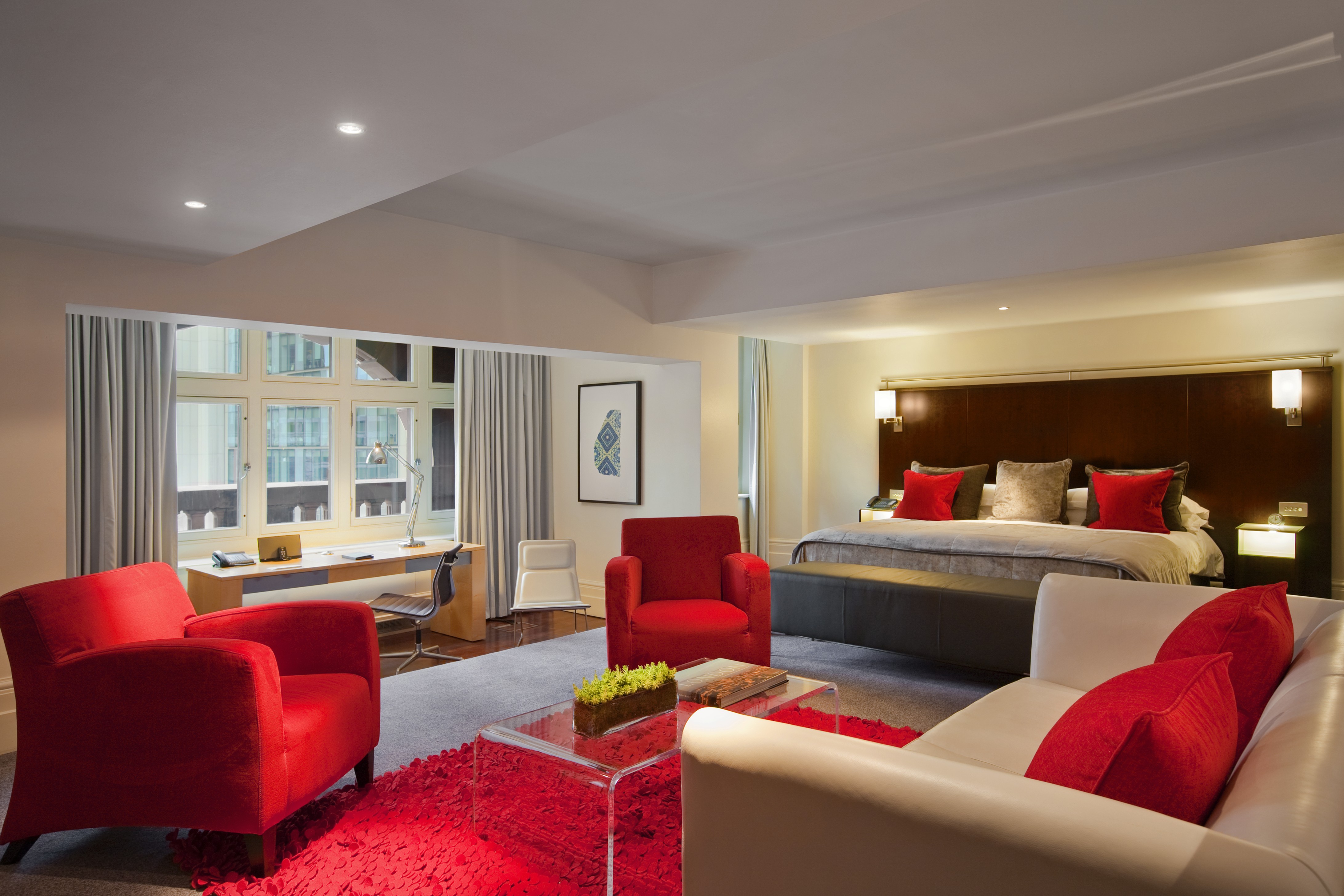 The bathroom was enormous with an extra deep and fast-fill tub together with the lovely and very natural Plantation range of bath products (no parabens, no sulphates). And we loved this cool bath mat so much, that we enquired where we could purchase one. 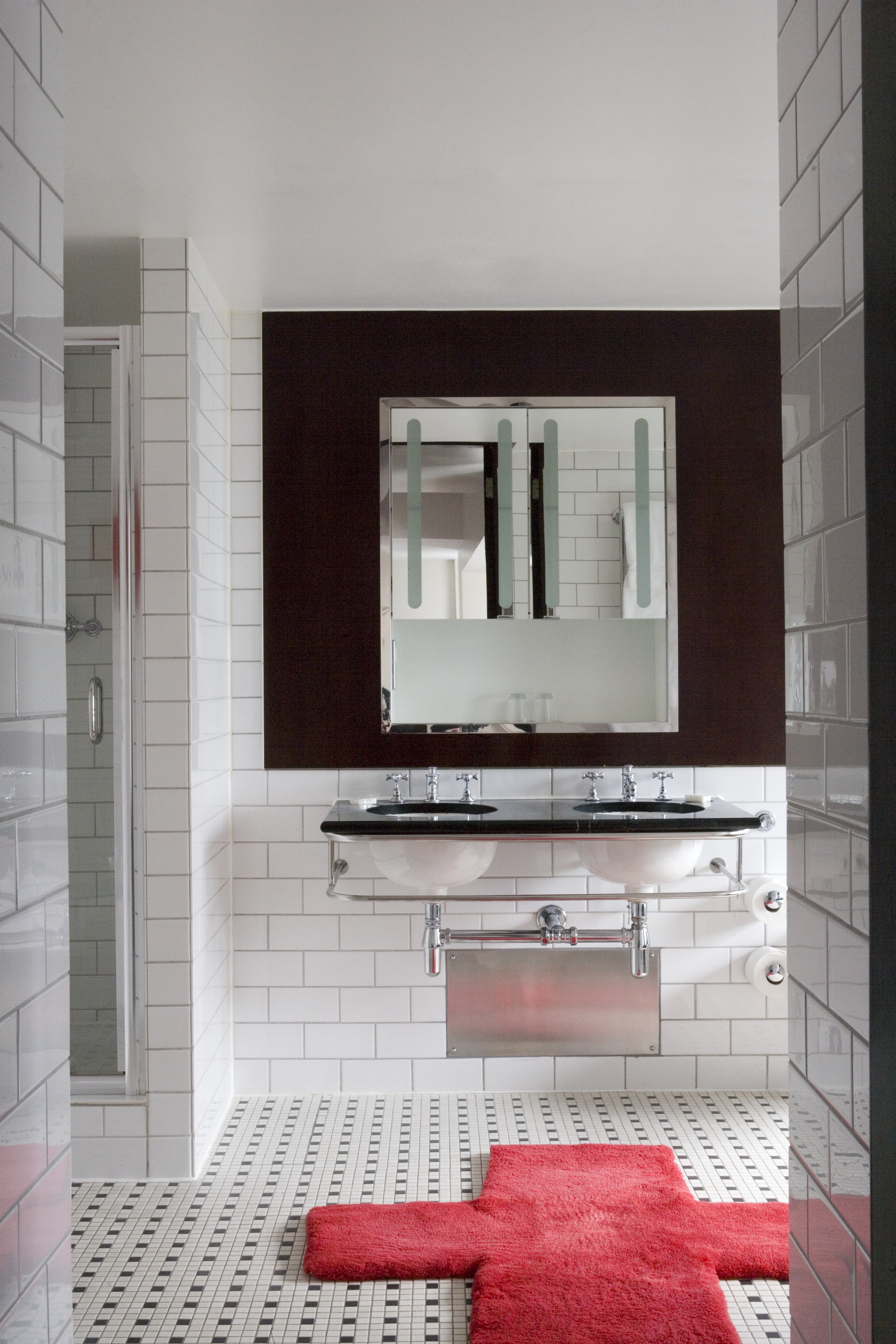 As we all know, when staying in hotels, it’s the little things that really do make a massive difference. Such as having fresh milk cooling in the fridge, and Andaz go one step further and also have complimentary fresh orange, pear & raspberry juice and water plus an abundance of nibbles such as nuts, old-fashioned humbugs and chocolate. If you stay in a suite, the wine is complimentary, too (if you don’t like red, you can call down and request a white).

We’re not mentioning this purely because it was complimentary, but also because it shows great attention to detail. How many times do you reach a 5-Star hotel gasping for a tea/coffee only to find a little fiddly carton of UHT or even worse, a sachet of powdered milk making a brew impossible!

Likewise, how many times do you arrive feeling a little peckish and in the end, have to dump your bags and leave your room in search of a snack. We were equally impressed with this novel idea, too. 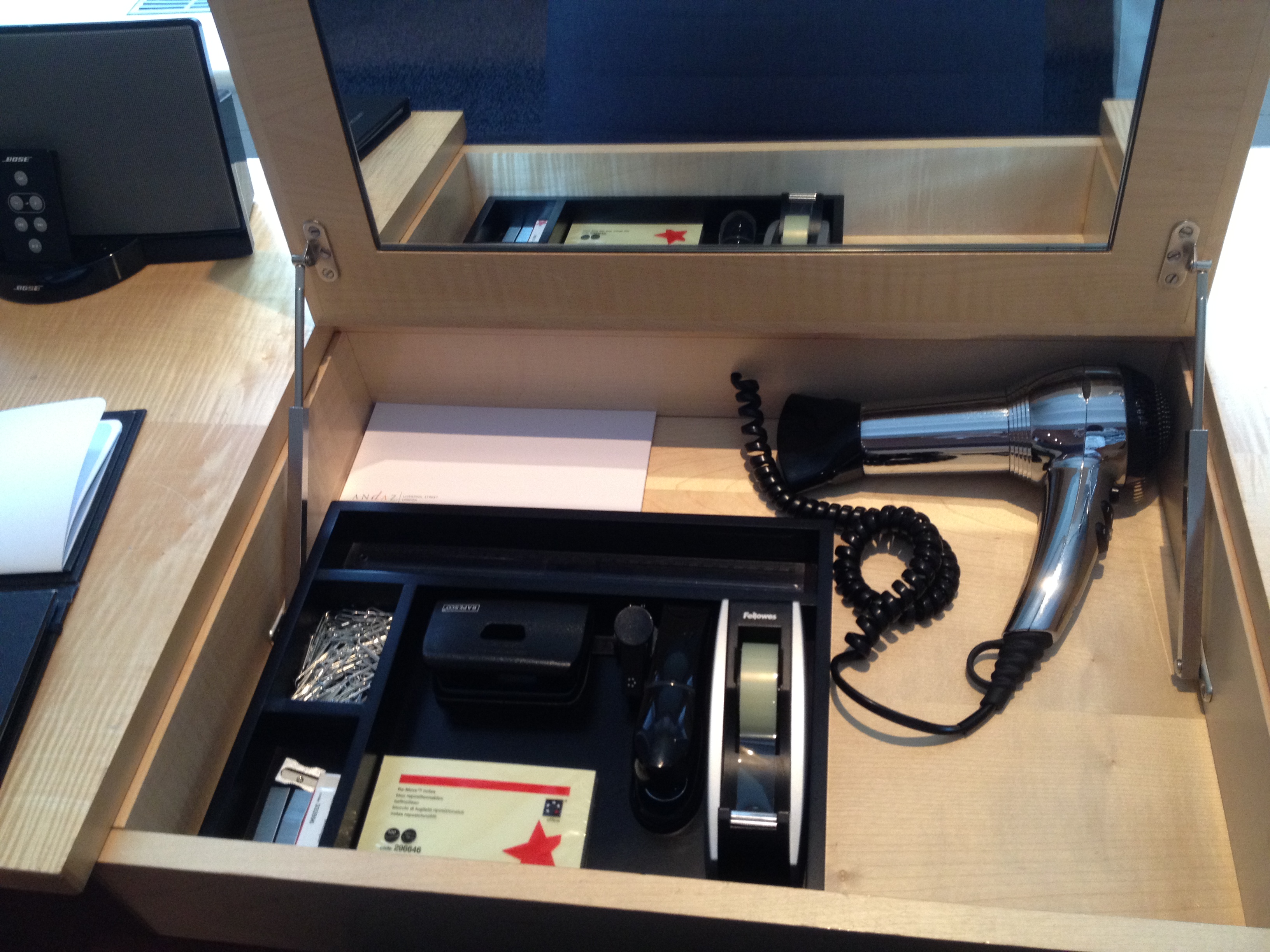 An oversized ergonomic desk full of all those little business essentials, which also happens to double as a vanity unit. Genius! Other special touches include a yoga mat, and if you have forgotten to pack a pair of tights, no problem; reception will send up a pair to your room. Same goes for men who forget their cufflinks, ties or dicky bows.

Andaz Liverpool Street has five restaurants including its own pub. And they’re the kind of beautiful dining spaces that we would want to visit even if we weren’t staying at the hotel. 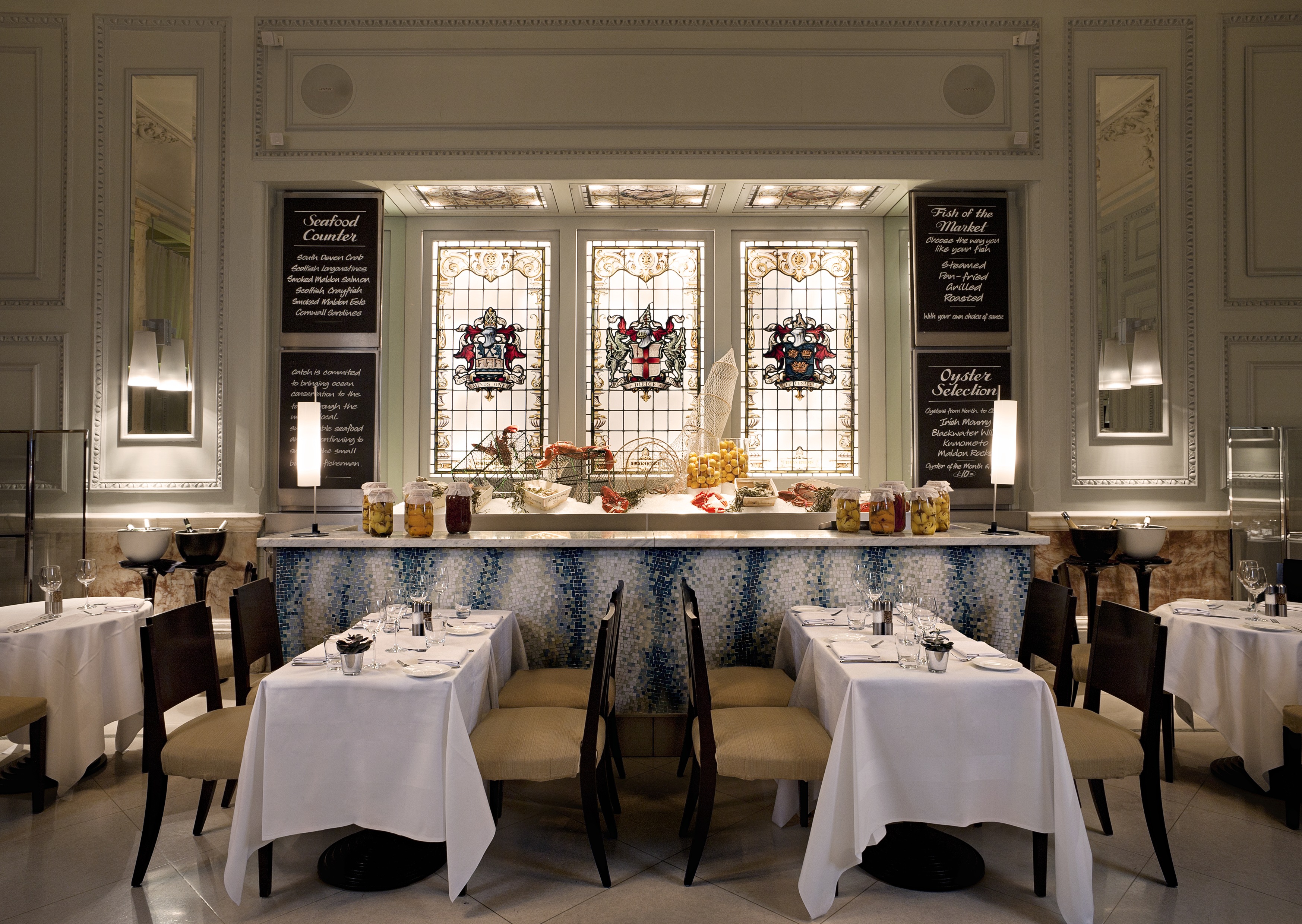 Catch seafood and fish restaurant is the place to enjoy sustainable fresh seafood dishes which change seasonally. There’s a beautiful oyster bar, too. 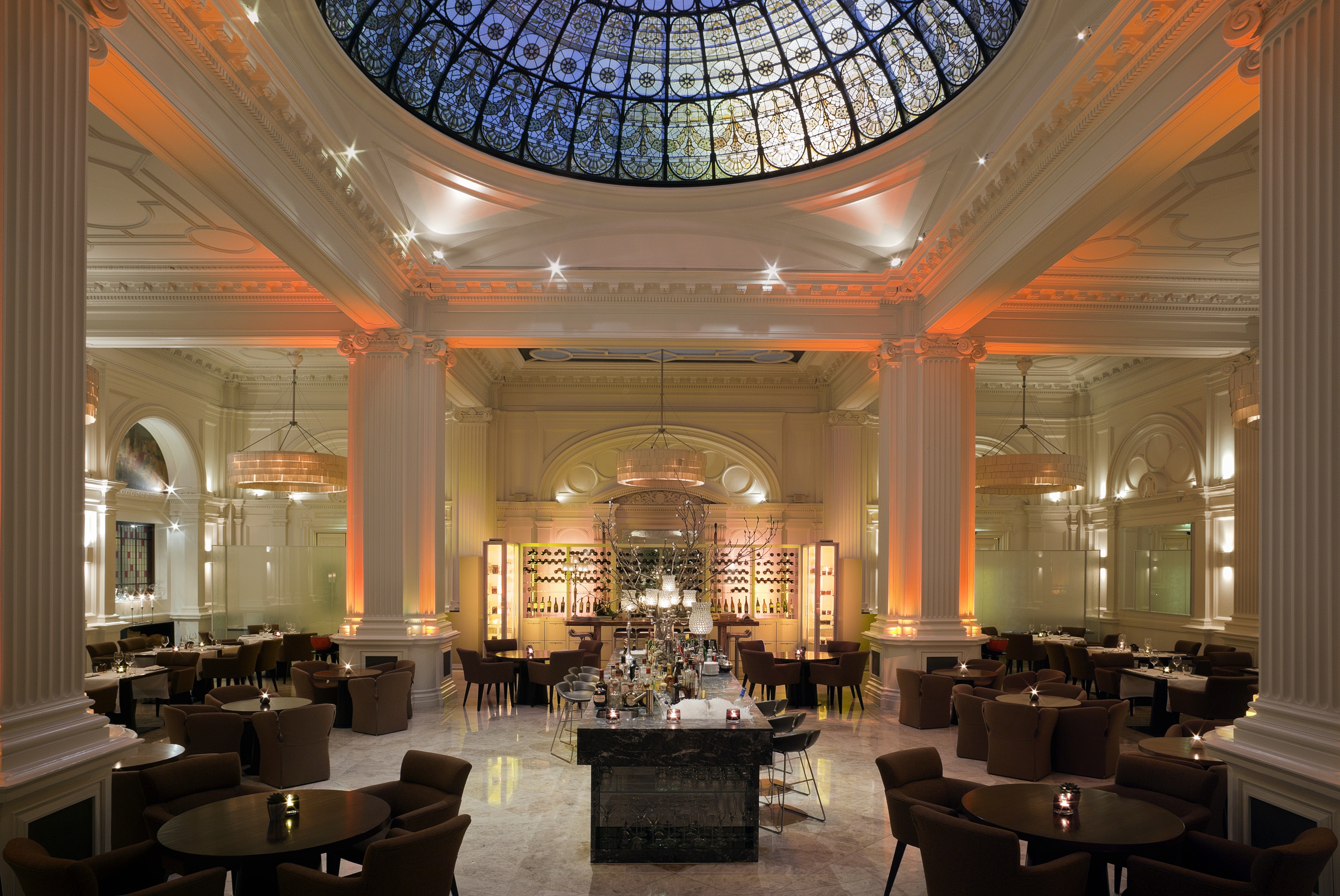 1901 restaurant and wine bar is housed in what was once the Great Eastern’s former ballroom. This Grade II listed room is topped by one of London’s original and magnificent stained glass domes. It’s the perfect place to enjoy a pre-dinner cocktail. Keeping with tradition, we ordered the Andaz signature cocktail named Jack’s Martini (after Jack the Ripper who reputedly used to haunt these parts in 1888);  a sublime concoction of Hendrick’s gin, elderflower cordial, cucumber and lemon. In Andaz West Hollywood, we had sipped the signature cocktail, aptly named Mr. Plant (after Led Zep’s Robert Plant).

Lovers of Japanese food, should visit Miyako to try their traditional menu of sushi, sashimi, teriyaki and their wonderful bento boxes. The George pub was a huge surprise as as we were expecting a modern look pub. On the contrary, this gem comes with all its original glorious architecture comprising oak panelled walls and crafted Victorian ceiling. And last but not least is Eastway, a New york style brasserie with all day dining.

But the real showstopper for us was this hidden and very unexpected gem. 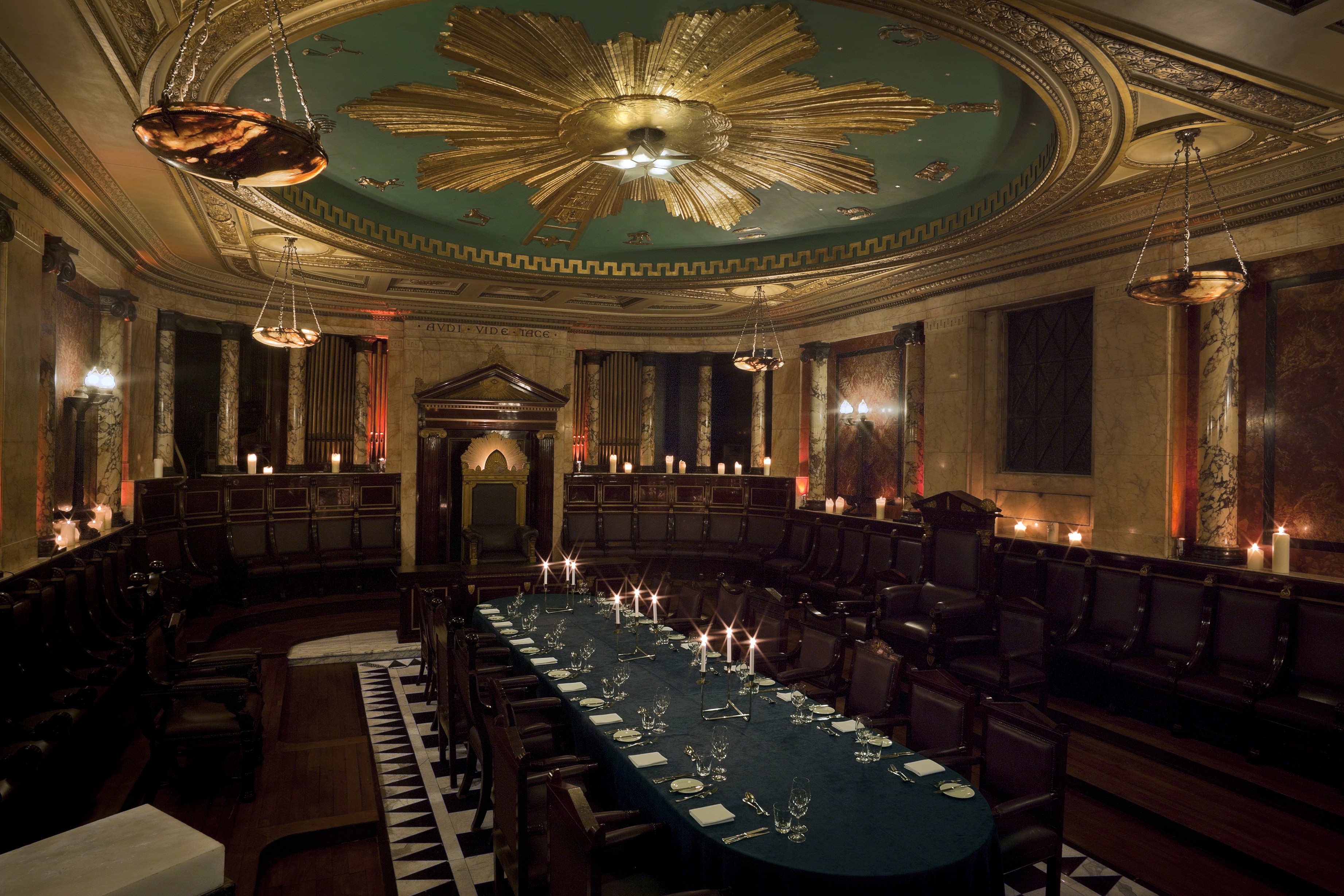 The Andaz has its own masonic temple! Astonishingly, the temple had lain hidden until it was discovered during a hotel refurbishment in the 1990s. This room was also built by Charles Barry Jnr at a cost of some £50,000 back then, which gives you an indication of its value today. The temple contains 12 types of marble, as well as a golden pipe organ and mahogany furniture. We were fortunate to be able to take a peek, as the room is usually closed to guests, opening only on special occasions for fashion shows, weddings and the occasional music video.

Another great thing about the Andaz Liverpool Street, is that it manages to be both a business hotel and a perfect spot for visiting tourists, too. During the week, you may encounter more suits, but when we checked out on a Saturday morning, there were many tourists milling around in the lobby. Its location is ideal for visits to specialist markets such as Spitalfields, Borough or Leadenhall, and it’s just up the road from the trendy neighbourhoods of Hoxton Square and Shoreditch. It’s also super close to the more traditional attractions of St. Pauls, Tower of London and Tower Bridge.

We simply cannot recommend Andaz Liverpool Street highly enough, either for business or pleasure. It’s the perfect blend of modern elegance and grand, theatrical Victorian interiors, coupled with the type of exemplary service that’s difficult to match in the City of London.