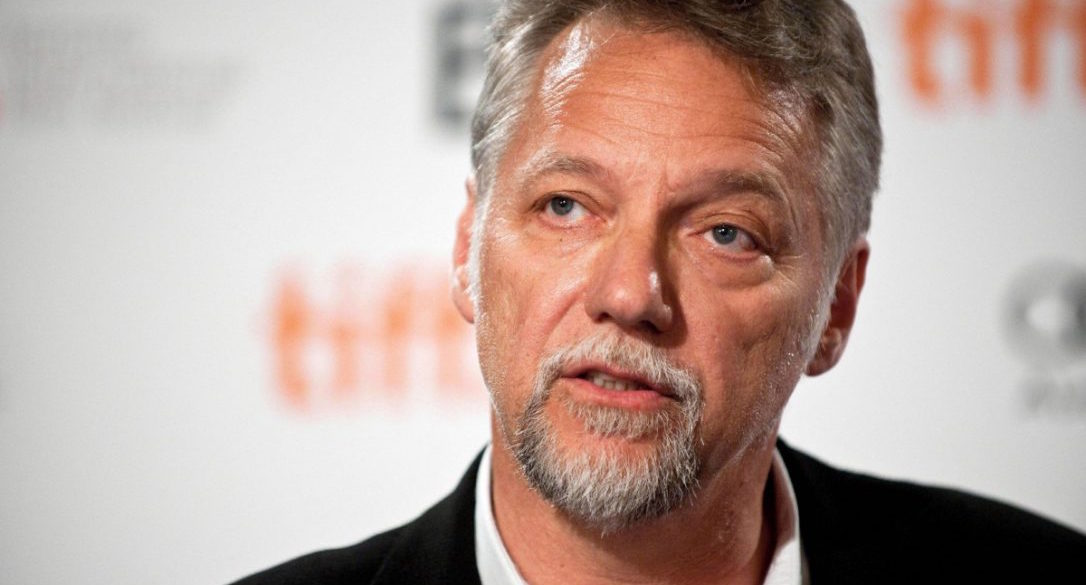 An interview with photographer Edward Burtynsky at an exhibition of the new Salt Pans series at the Flowers Gallery. Meanwhile upstairs there is a second exhibition entitled Essential Elements which is also is the name of the new Thames & Hudson book written by William Ewing.

Edward, can you tell us some more about this exhibition?

This is an idea that began about five years ago. Thames and Hudson wanted to produce a book that would take a whole different approach to looking at my work. So Bill started coming to the studio about three years ago. He literally looked at almost everything I ever did – I gave him my binders where I keep all my work and contact sheets and so on so he had a complete look through everything. Interestingly of all the different people that have ever been to the studio he spent the longest of anyone. In all over a longer period of time Bill probably spent a total of over a month in the studio.

I understand that he took quite a different approach to make this book.

One thing I do is that I tend to work in series, like here with Salt Pans which is a complete and discrete series, shot over a period of time. I then would made in to a book and it is promoted around the world. However Bill wanted to disregard these series and was just looking at the images as he found fit. He was looking at the juxtapositions as it made sense conceptually, together or aesthetically or visually – colour wise, line wise, form wise, composition wise and so on.

Also interesting was that there was no chronology – he didn’t care whether it was early work or late work or whatever so mixed that up too. The third interesting thing that he did was that he took a whole body of work that has remained quiet up to now. This is a body of work that I have been working on my entire life which is architecture and design. I still use the things that I’ve learned in shooting architecture – I was shooting urban architecture in China for example. I have always had architecture as part of what I did as an artist, but its never been brought in to my convention artwork thus far. He interleaved that work as well and brought it in to the book to be seen into a different light.

Do you see this books as a mid-career retrospective.

It is not really a retrospective per se – its really a way to look at the work and look at it from the sense of its visual subject matter and how they fit together. He found that even through all these different subjects there was a kind of persistence of vision and a consistency of seeing so that as I jumped across all these things there are things that carry over. He is taking us away from the content and more into visual aspects. Its been a real fun project.

He has also been looking at all the review and essays that have been done, and some dissertations that have been done of my work and found some really interesting excerpts. It is good to have these kernels of ideas that all come from different perspectives. So I’m really excited that this is the very first launch of the book and you are the first to see and first to experience

Is there something that you can tell us about working with Bill and about how personally you felt looking back at all this work and looking at all these different series.

It is really interesting. It is great to work with somebody who is able to look at you full body of work – a deep look at everything I have done. Sometimes he would unearth something and I would say yeah, its nice but not something I would want published! So sometimes we had to be able to navigate choices. In the book itself there are the very iconic works, but on the other hand, a lot of it – and I would say at least 50% – has never been published before. About 25% of it was completely new so there are some new pieces that we have discovered through working and collaborating with him

Did it make you think differently about the way you were working or make you change anything?

Interestingly I think that moment of real change happened for me in 2003. At that time I felt I was just working in discrete projects quarries, mines and so on. I was thinking that these were discrete things and at that moment I really saw the consistency of the subject matter. I then started seeing it all kind of stitched together that way. In the book what is interesting is seeing things that were never meant to be juxtaposed together.

For example we have in the exhibition a picture of Houston from 1987 and right beside it is a mined landscape from 2007. Even though there are twenty years between it is keeps you on your toes. Playing in all kinds of different ways there is a fundamental connection between the two images.

Did it make you reflect on the changes from analogue to digital, because during the period of the book there have been big changes in photography itself?

In some ways not really, because even though there was that transition from large format on the ground it is all about the image. Practically thought with analogue I would shoot two 8 x10 frames at a time and thats a whole ton of reloading. It was also really expensive – one holder would do just one shot, and this is in the early 90’s, costing $30 per frame before I even printed it up. It was a huge commitment for one picture – I would be sweating over what picture I was going to make! I would sit there and wait for hours because back in analogue days if you didn’t get the contrast and light and clarity just so!

With film you just have to wait for conditions to be perfect. Digital is very different. I’m in the helicopter and all I have to do is to put in one bit of media in and I get 300 frames – so all that happens is that have I sometimes have to change my battery.

Along with the increased resolution of digital there are also all the extra tools of editing software.

I have to say that I don’t use photoshop as a compositional tool – only as a printing tool. I am interested in the fact that these are visions of our real world. When I used to make prints in an enlarger I only had three controls: density, sharpness and colour. Now I get to control every square inch of the picture and so I’m controlling the surface of the print in a way that wouldn’t have been possible in an analogue way. Every square inch of the picture is being considered.There are all kinds of things that I can do today that I couldn’t do before. It’s a whole new world as a print-maker.

I don’t even have an enlarger any more. When I went back and looked at earlier work for Essential Elements I had to scan them in and remaster. I would ignore the old master prints from that negative and then afterwards put those images side by side, and effectively they’re different images. Im getting the print that I wish I could have got back then! So the technology has been liberating

Over time you seem to have steadily moved away from your subjects. Are you worried about to some degree losing the hand of the artist/photographer as you do so?

I dont know. I’ve gone up higher but you can make out farms and stuff but I’m interested in the fact that you can always go to the print and still understand the scale and see the people, if you look carefully. As soon as you go too high and can’t make out vehicles and people then that would become more pattern and more detached, but I’m always trying to be at the critical distance where you can unpack the image and make out the landscape and still visually dig in and make out what’s going on.

How do you see the Salt Pans series? Is it a chapter in a larger project?

I think its a stand alone series. In Salt Pans this is a pretty benign effect we are having on the landscape – if is stopped within a decade you would never know anyone was ever there. I’m working on the anthropocene but it doesn’t really fit as the things that we are looking at are those that will leave a signature in a million years. where were leaving evidence from plastics, concrete, glass, tunnels and so on.

How did you come to shoot Salt Pans?

I’ve known about these things for a few years [at Little Rann of Kutch in Gujarat, India] and I kept thinking I’ve gotta go so I decided – go! I was doing work in Africa and I had a window of 10 days between two shoots and so planned this shoot. I did about 4 flights. It’s a military zone so its very hard and took an lot of angling to get unlimited flying in their area. I was able to shoot on the ground but it wasn’t nearly as interesting. For me it was a visual exploration of this space. My work has never really been on that documentary level so I would not do a story on the people on their plight – this is about how we as humans extract resources. So it’s following from that sort of work, whether its mines, quarries, agriculture, salt – so its in that category.

They are very abstract images. I think a lot of Paul Klee.

I love Paul Klee and was thinking Paul Klee in this! The subject allowed for this abstraction and I’ve always been interested in it. With my Water series in particular it allowed me to look at abstraction in a way that other subjects didn’t allow. With water when i first started in 2008 I rented an 80ft bucket and I realised very quickly that to understand the scale at which we start to reshape the landscape a bucket wasn’t enough.

It didn’t tell the story so you had to get up 600/800 feet to to see the irrigation shaping the desert.You can sit on the ground and see the irrigation and farms but it doesn’t read as well as at 1000 feet – from that perspective you really understand. The subject matter pushed me up. When I’m up there I’m always always interested in abstraction and abstract expressionism and all-overness

Are you worried that these images just become viewed just like abstracts and any environmental angle gets lost?

These are pretty benign. With the Salt Pans I don’t think there is a great environmental message and I’m happy for people just to view them as they like. They are just whimsical – talking PK that was running through my head and the figure/ground, the lines i was thinking tonal background and taking a line for a walk and so on.

Every visit to Windsor Castle is special but now more than ever with the current display, Prince Philip: A Celebration. We...