Last week we slipped behind the gilded gates of Buckingham Palace to view the Duchess of Cambridge’s wedding dress which, this year, is part of the Summer Opening. When The Queen departs for her summer holiday, Buckingham Palace throws open its doors for two months and visitors can wander along the red-carpeted corridors through the spectacular state rooms whilst marvelling at the amazing royal art collection (plenty of Vermeer’s and Van Dyke’s for starters!).

You should allow a good two hours to complete the tour at a leisurely pace and although we rarely opt for an audio guide, on this occasion we did and was glad; it really enhanced the experience.

The Ballroom, 14 metres high by 34 long and decorated in gold and white is where the Queen entertains the visiting head of state at the state banquets, at which 160 guests are seated at a long horseshoe-shaped table; this small fact gives you an indication of the enormity of the room.

With the chandeliers dimmed the Ballroom isn’t its usual dazzling self, but neither is it gloomy; as it looked in the news footage which showed The Queen describing the actual display of the wedding dress as “horrid” (due to the fact that the mannequin seemed to be missing a head). Since then the lights have been brightened and the dress looks nothing short of fabulous. 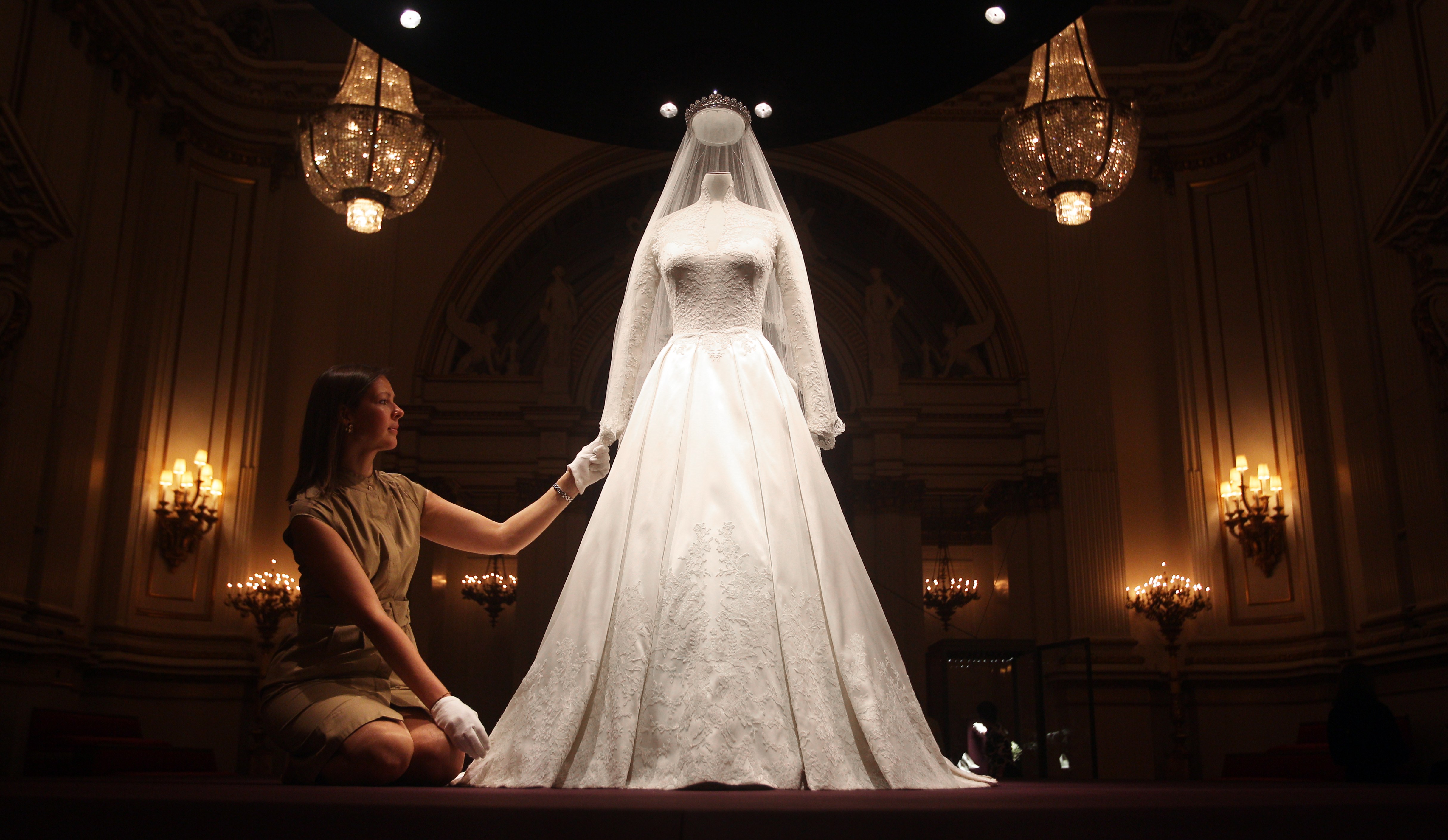 Designed by Sarah Burton for Alexander McQueen, the dress is made from ivory and white satin-gazar (stiffened organza). The shape of the skirt, with arches and pleats, echoes an opening flower, and the ivory satin bodice, which is narrowed at the waist and padded at the hips, draws on the Victorian tradition of corsetry – a hallmark of Alexander McQueen’s designs. The back of the dress is finished with 58 gazar and organza-covered buttons fastened by Rouleau loops. The underskirt is made of silk tulle trimmed with Cluny lace. The train measures a modest 2.7 metres.

The appliqué for the bodice and skirt was hand-made by the Royal School of Needlework, founded in 1872. The lace was produced using the Carrickmacrosse lace-making technique, which originated in Ireland in the 1820s. Individual flowers were hand-cut from lace and hand-engineered on to ivory silk-tulle to create a design that incorporates the rose, thistle, daffodil and shamrock. Each lace motif, some as small as a 5-pence piece, was applied with minute stitches every two to three millimetres. Here’s a close up:

The bride’s veil, made of layers of soft, ivory silk-tulle with a trim of hand-embroidered flowers, was also embroidered by the Royal School of Needlework and it was held in place by the Cartier ‘Halo’ tiara, which was lent to The Duchess by The Queen.  The tiara – formed as a band of 16 graduated scrolls set with 739 brilliants and 149 baton diamonds -was presented to Princess Elizabeth (now The Queen) by her mother on her 18th birthday.

The wedding shoes were also hand-crafted by Alexander McQueen.

And last but not least, the diamond earrings worn by The Duchess on her wedding day are also on display. Created by the London-based Robinson Pelham, the design of oak leaves with a pear-shaped diamond-set drop and a pavé-set acorn suspended in the centre was inspired by the Middleton family’s coat of arms.

CELLOPHANELAND* were guests of Buckingham Palace and The Royal Collection.

Images by The Royal Collection and CELLOPHANELAND*.