If there is one reassuring constant of sculpture over the ages, it is the repeated attempts at representations of the human form. For The Human Factor the Hayward has brought together major works by twenty or so leading artists from the last quarter of a century, and reflects on how we represent the ‘human’ today.

They suggest that the exhibition ‘pointedly revisits and update classical traditions of sculpture… inventively remixing past and present’ but the visitor would be hard pressed to find the classical here, overwhelmed as it is by more Duchampian reworking of more modern movements. Grouping works thematically, and not always successfully, curator Ralph Rugoff addresses themes like consumerism, physical perfection, violence, religion, sex and death.

The least successful works involve the cliched use of shop mannequins. John Miller’s eroticised male mannequin poses in a pile of horse-shit, plaster on cheek whilst Isa Genzken’s are dressed with cheap charity shop sundries. Thomas Hirschhorn’s 4 Women has them in a glass showcase, numbered one to four to represent increasing levels of alienation and violence.

Much better are Yinka Shonibare and Ryan Gander who both re-imagine Edgar Degas’s Little Dancer. In Shonibare’s version, the (headless) dancer has a surpass in store – in a fetching ethnic print dress she carefully clutches a pistol behind her back.

Ryan Gander versions have a more witty take. In one Degas’s dancer has taken a break from her plinth and sits behind on the floor enjoying a quick fag, whilst in another version stands on tiptoes to peer through a window.

We also liked Martin Honert’s sculptures. Based on personal photographs, the best has himself as a child sat at a table and painted with exaggerated light and shadow and faded ektachrome colours it has the eerie quality of memories somehow brought to life.

In an otherwise empty gallery is Maurizio Cattelan’s Him. From behind we approach a young boy on his knees in prayer. In a moment of shocking realisation you see it is actually Hitler. Eyes upwards is he penitent or simply pensive? A less successful work in another room features an unblemished John Kennedy lying in state.

Mark Wallinger’s statue of christ, Ecce Homo, which once graced the Fourth Plinth in Trafalgar Square, is shown here on a low plinth, but still effective and whilst talking of Trafalgar Square Katharina Fritsch, of blue cockerel fame, has three strong works exhibited. Each tableaux comprises a monochrome figure before a blown up photograph. In one a blown-up religious kitsch black Madonna stands in front of a photographic wall of ivy, another features a yellow chef and nondescript German roadside Inn.

For more kitsch what better than Bear and Policeman (1988) by Jeff Koons – actually the oldest work in the show. An oversize toy bear with child-like stripy pullover and popping eyes, grasps a bobby’s whistle. Cute at first glance, but the grasp of the whistle hints at a deeper meaning – it is actually a metaphor for sexual humiliation.

Out on one of the terraces, Pierre Huyghe has reworked a traditional reclining nude. In place of its head is a open hive, the bees busily swarming around whilst on another Rebecca Warren’s three lumpy women are tall, unrecognisable and totem-like. 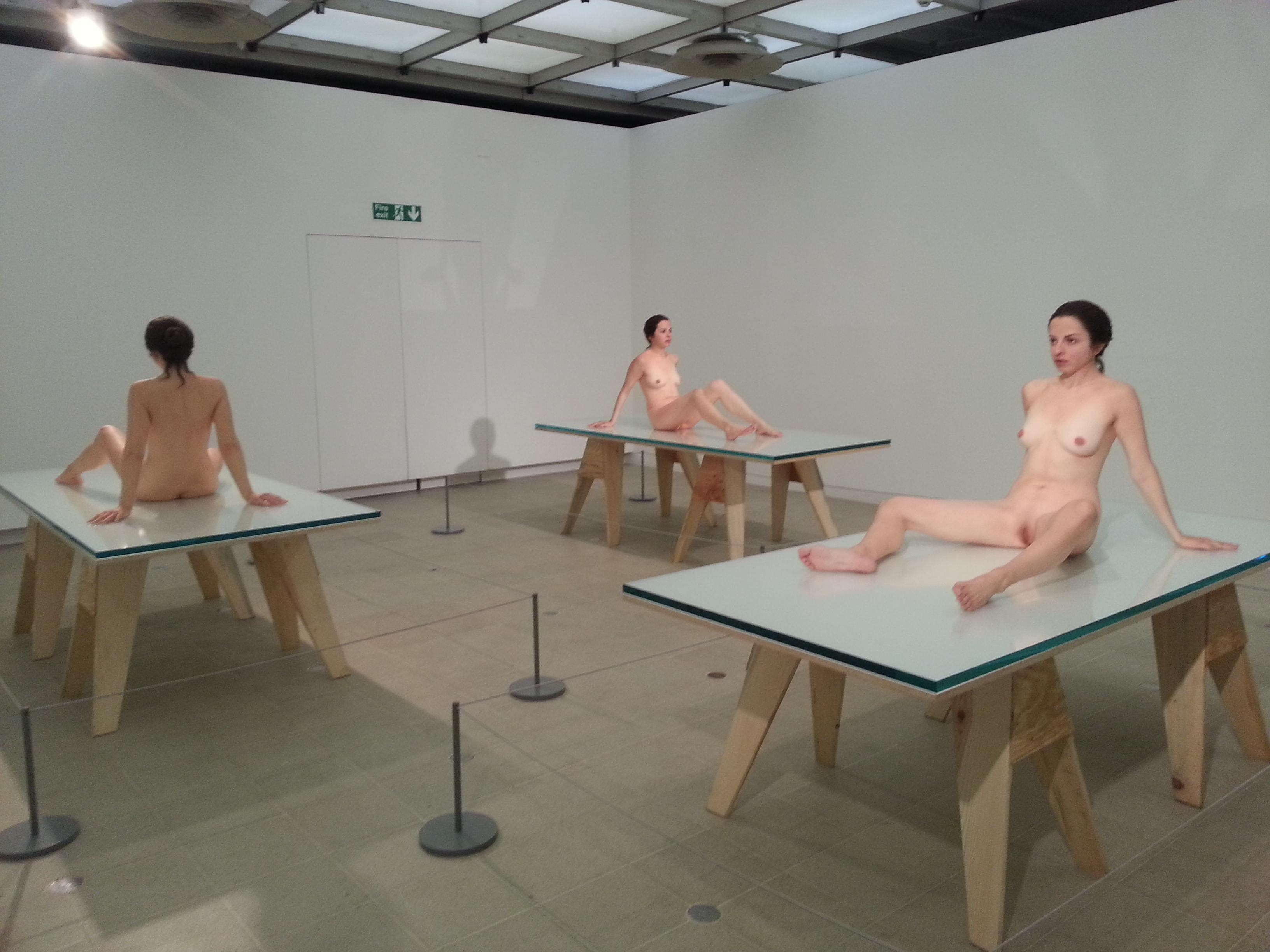 Last but not least Paul McCarthy’s That Girl (T.G. Awake) is a diversion from his more familiar lumpy and vivid pink latex grotesques. He has turned to Hollywood experts to create three lifelike casts of the actress Elyse Poppers. Naked, exposed and legs apart they sit on glass-topped trestle tables. They are so disturbingly lifelike it is hard to escape the notion, however impossible, that they will somehow come to life.

There are omissions, but to complain about missing artists or the few lesser works would be churlish. This is an excellent overview of the current – pretty healthy – state of figurative sculpture.

The Human Factor: The Figure in Contemporary Sculpture until 7 September 2014

Images by CELLOPHANELAND* and The Hayward Gallery.