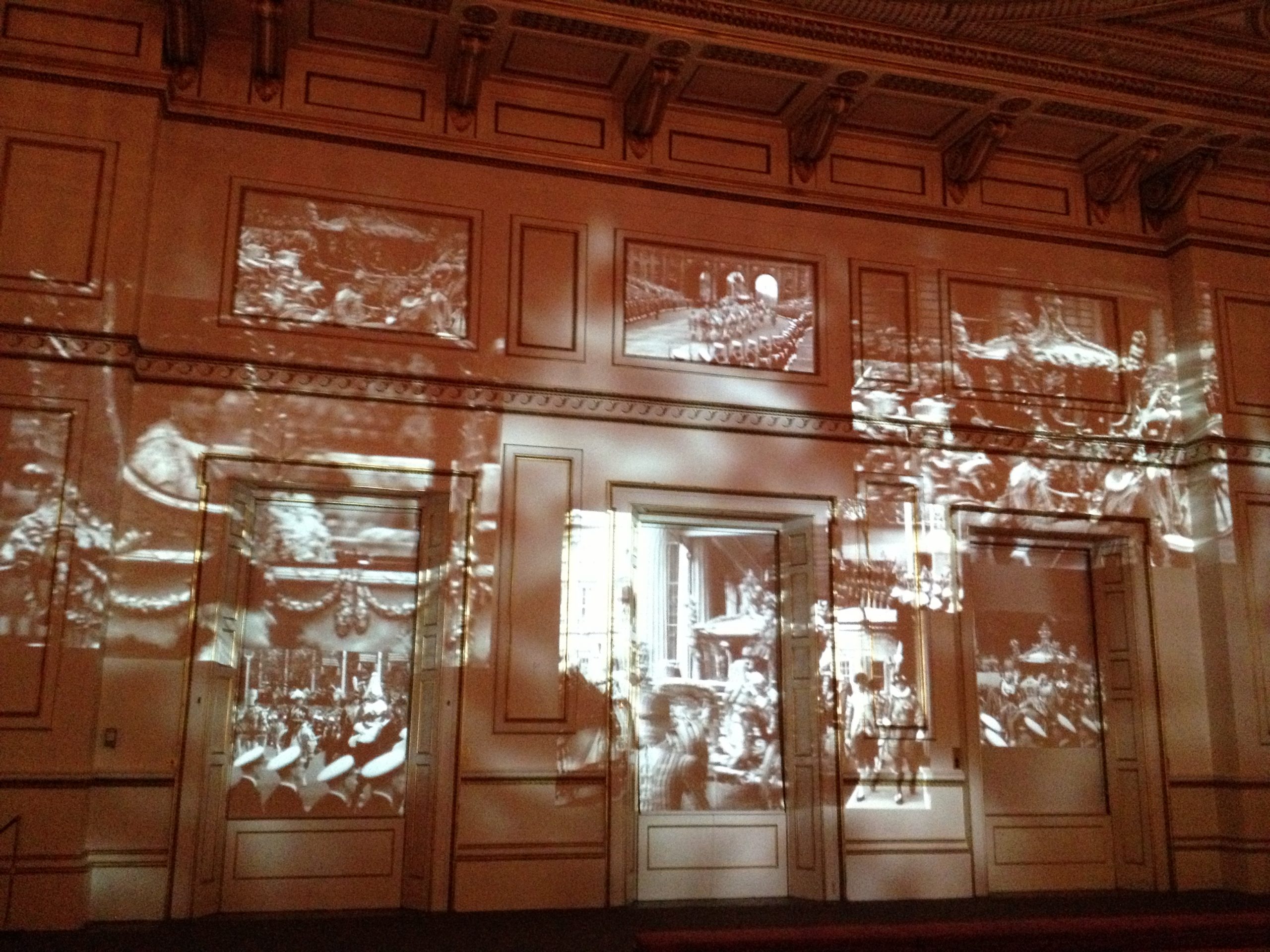 ‘Opposite are row upon row of peeresses mounting towards the very roof: They look like a lovely hunk of fruit cake; the damson jam of the velvet bordered with the clotted cream of ermine and sprinkled with the sugar of diamonds’

The largest exhibition ever mounted about the Coronation of Her Majesty The Queen opens at Buckingham Palace today, and yesterday we were able to take a sneak preview of the unprecedented array of dresses, uniforms and robes worn on Coronation Day. In celebration of the 60th anniversary, also included, are paintings recording the extraordinary day, objects used by The Queen at the ceremony, the Coronation jewels, and a magnificent recreation of the Coronation State Banquet; the very same porcelain, silver-gilt and flowers that were used in 1953, along with the five-course menu written in French, the official language of court.

The Queen acceded to the throne on 6 February 1952 and was crowned at Westminster Abbey the following year, on 2 June 1953. The day heralded the dawn of what was described as a ‘New Elizabethan Era’. Three million people lined the processional route, 11 million listened to the radio broadcast, and 27 million watched the ceremony on television; the biggest outside broadcast in the history of the BBC up to that point. Below is the Marconi MkII Image Orthicon camera used on the day: 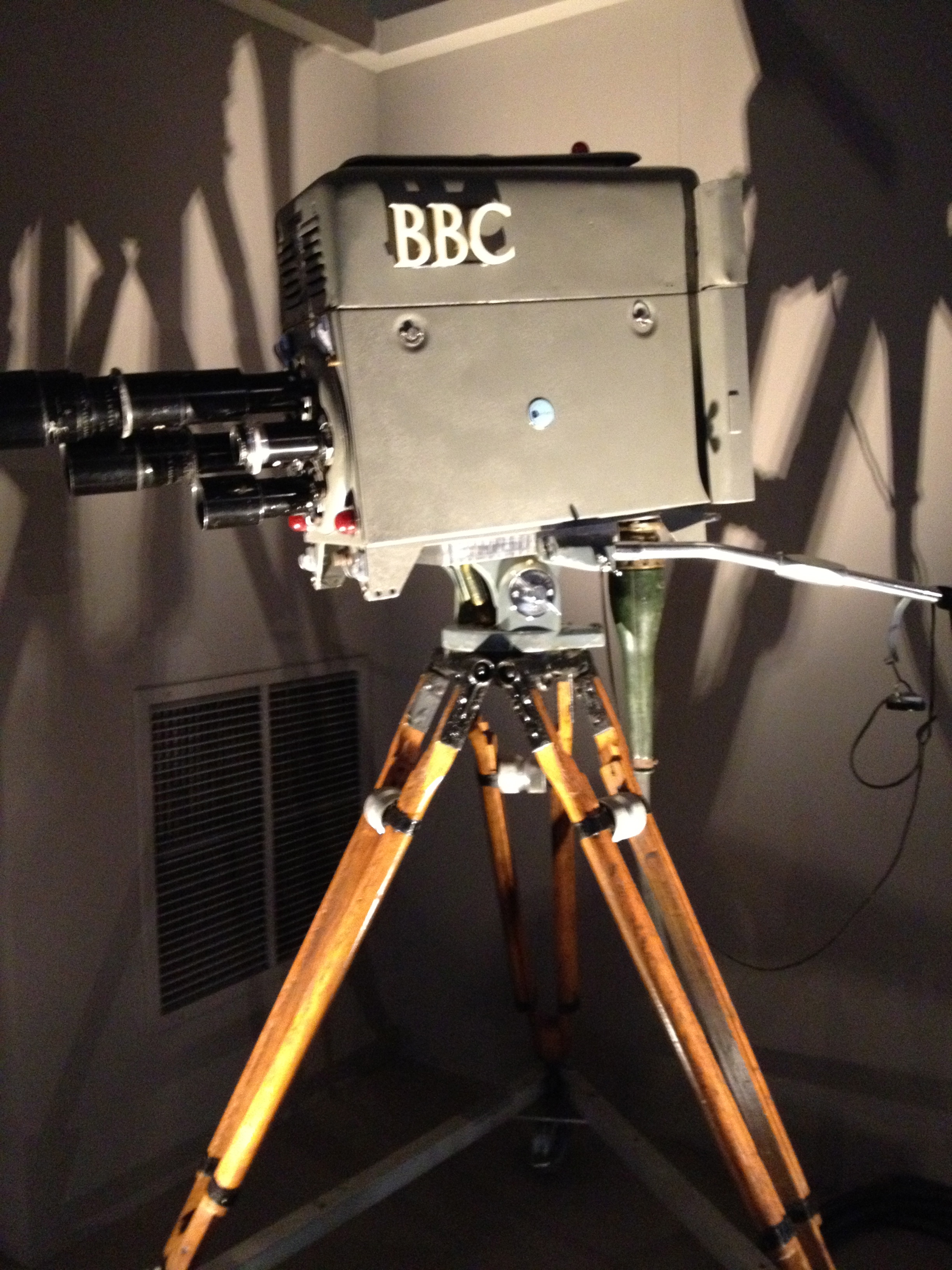 Here is The Queen’s bound copy of the Form and Order of the Service: 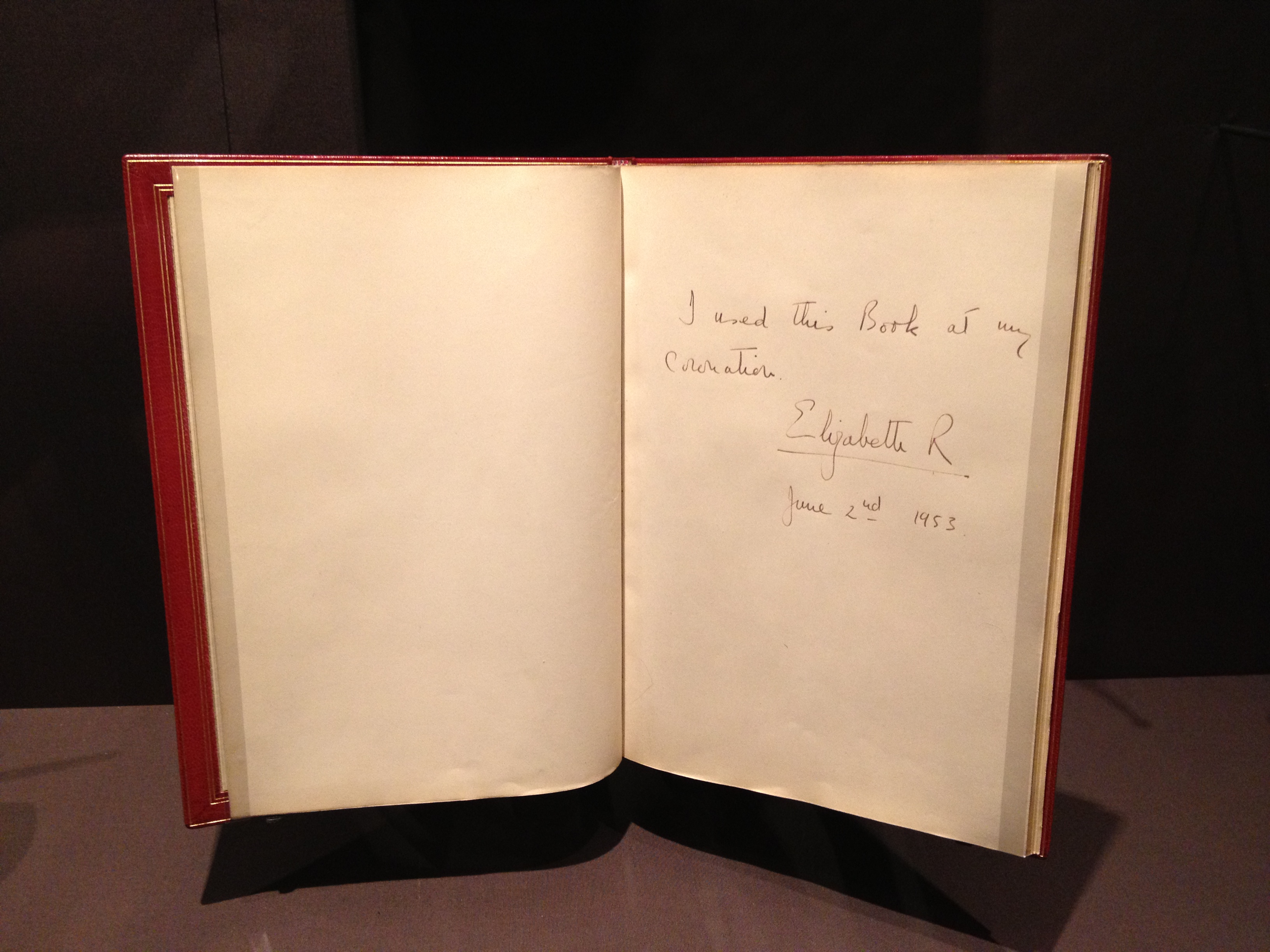 The most sacred part of the Coronation service – the Anointing – effectively consecrates the Sovereign and sets them apart from the people. The mystical ritual was the only part of the Coronation service that was neither televised nor photographed. Assisted by the Mistress of the Robes, the Queen had to remove all symbols of her status. She was then dressed in a simple white pleated dress, designed by the couturier, Normal Hartnell, with the intention of showing the monarch ‘uncovered’ in a state of humility, without the trappings of kingship.

The Anointing Canopy was made for the Coronation of King George VI. It is woven from cloth of gold, and embroidered with Imperial Eagles by the Royal School of Needlework. The crowning took place at exactly 12.33pm, followed by the Acclamation which involved all those present shouting ‘God Save The Queen’. 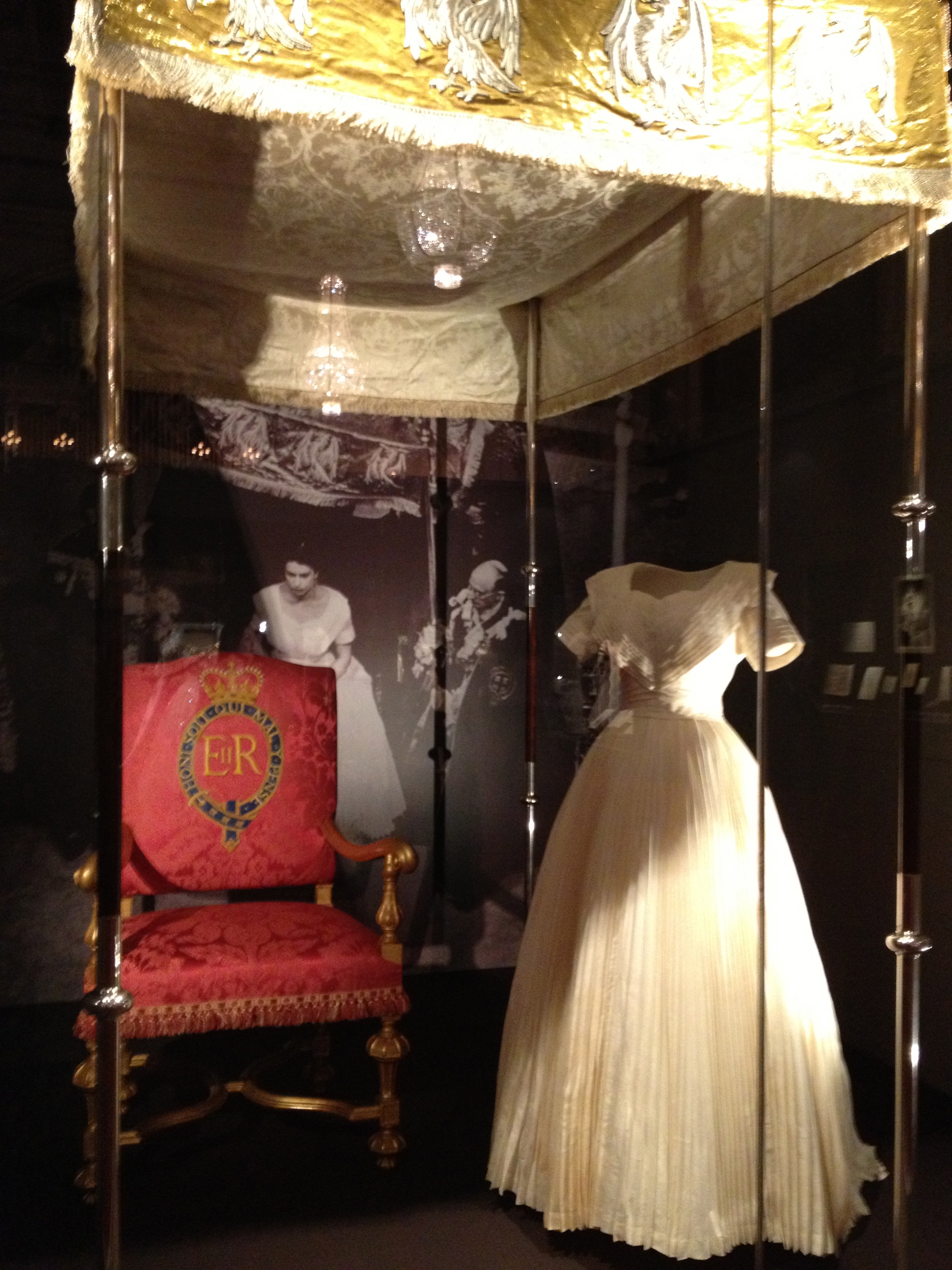 In October 1952, Normal Hartnell was entrusted with the task of designing The Queen’s Coronation Dress; an obvious choice, having designed her wedding dress. Hartnell prepared nine designs, and the Queen chose the eighth design after making some small changes. The embroideries of the dress, in coloured silks and gold and silver thread, were arranged in three scalloped, graduating tiers that fell from the slightly pointed waist. Each tier was bordered with alternating lines of gold bugle beads, diamantes and pearls. The skirt had a slight train and was constructed with a backing of cream taffeta reinforced with horsehair crinoline. This ensured that the skirt would not lose its shape under the great weight of the encrusted embroideries. Interestingly, Cecil Beaton, on watching The Queen processing down the aisle of Westminster Abbey, described it thus in his diaries: ‘as she walks she allows her heavy skirt to swing backwards and forwards in a beautiful rhythmic effect.’ Due to its clever design and construction, Hartnell’s Coronation Dress was declared a triumph and remains to this day, his masterpiece of royal couture. 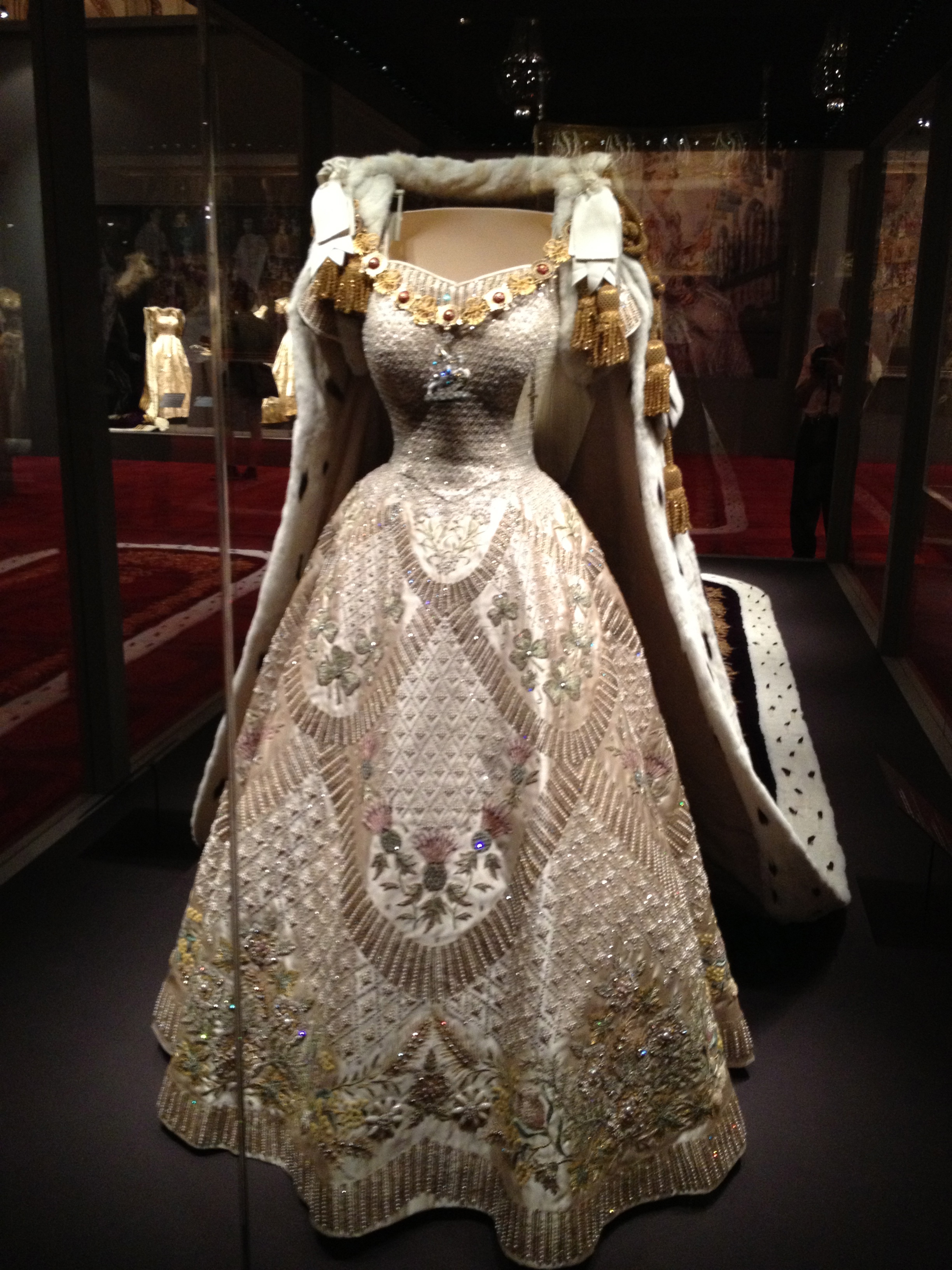 Below is The Queen’s Robe of Estate.  Twelve embroideresses from the Royal School of Needlework used 18 different types of gold thread, and dedicated more than 3,500 hours to embroider wheat ears and olive branches; symbols of prosperity and peace. 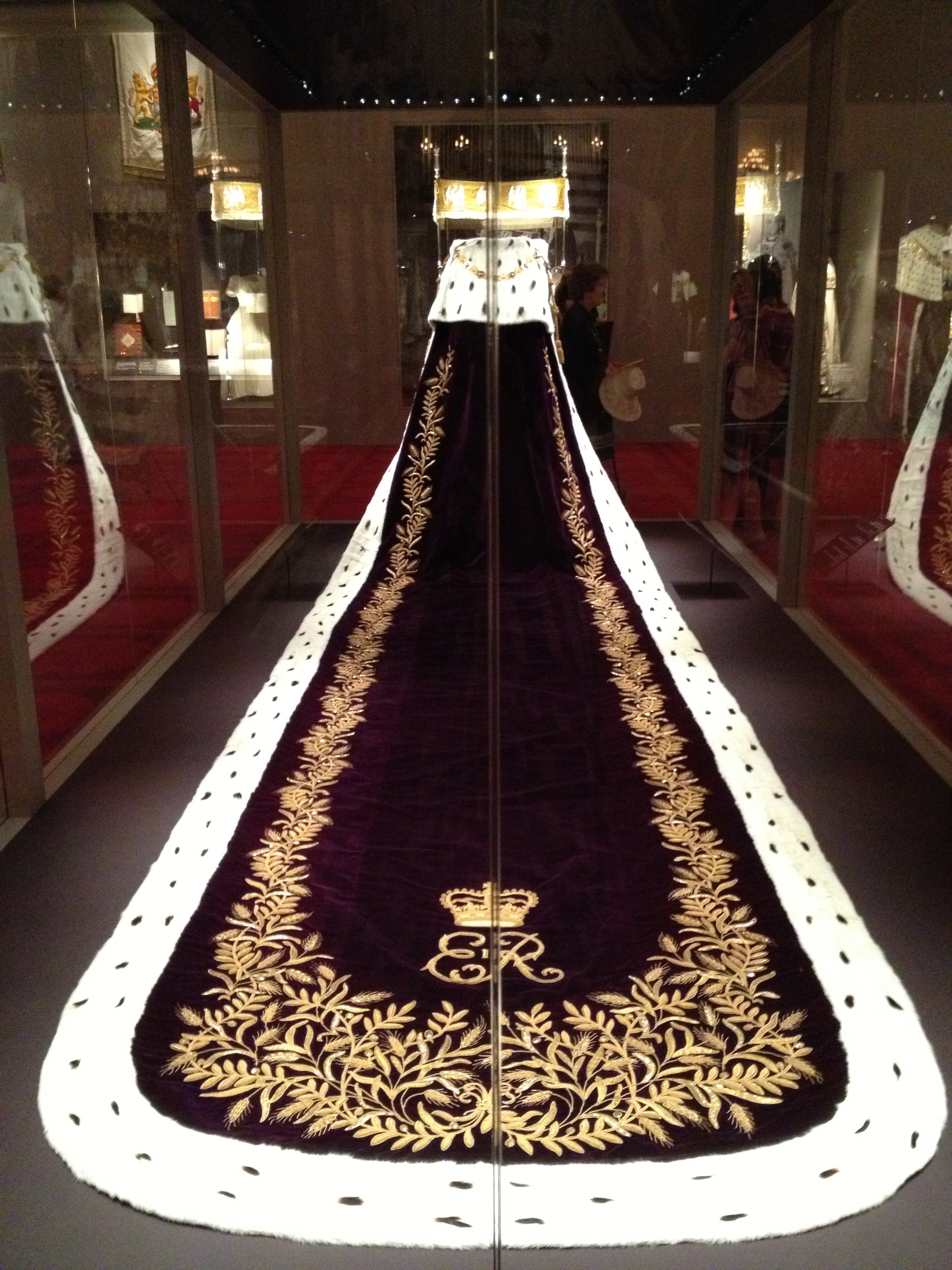 At the time of the Coronation, the Queen was a mother of two young children: Charles and Anne. Below are the four-year-old Prince’s outfit and dress worn by the two-year-old Princess (who was considered too young to attend the ceremony). Alongside is the dress worn by The Queen Mother, Princess Margaret and The Duke of Edinburgh’s uniform of an Admiral of the Fleet, coronation robe and coronet. 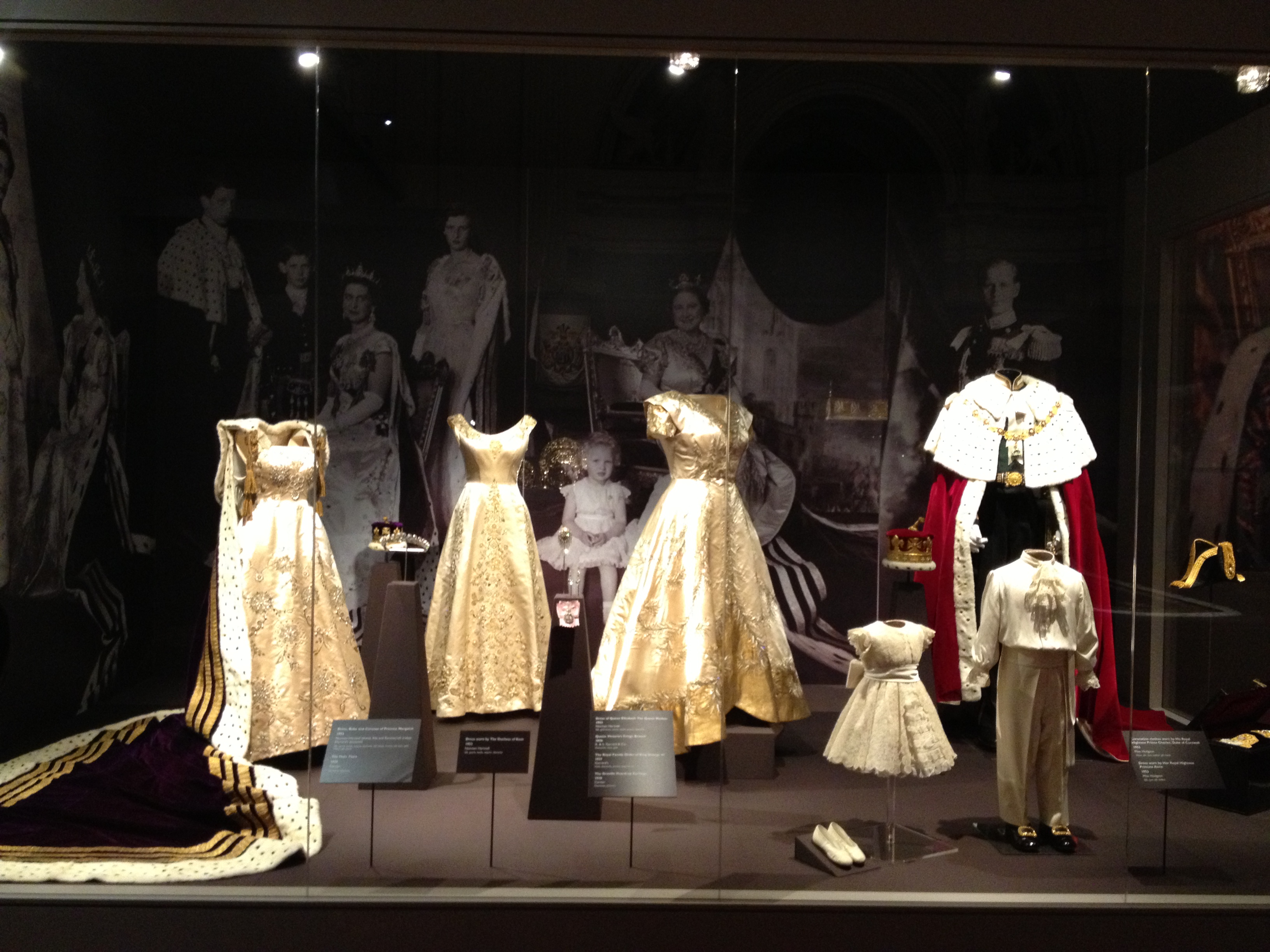 It was a real treat to see the State Dining Room dressed to evoke a flavour of the events of 60 years ago. Back then, two Banquets, and two evening receptions, were required to accommodate the 8,000 guests in attendance, including foreign Heads of State, representatives and rulers of Commonwealth countries, as well as the Royal Family. On the menu: Tortue Claire Sandringham, Délices de Soles Prince Charles, Carré d’Agneau a la Windsor, Haricots Verts au Beurre, Pommes Nouvelles, Salade Royale, Asperges, Sauce Mousseline, Boîte de Fraises Reine Elizabeth and Friandises Assorties. 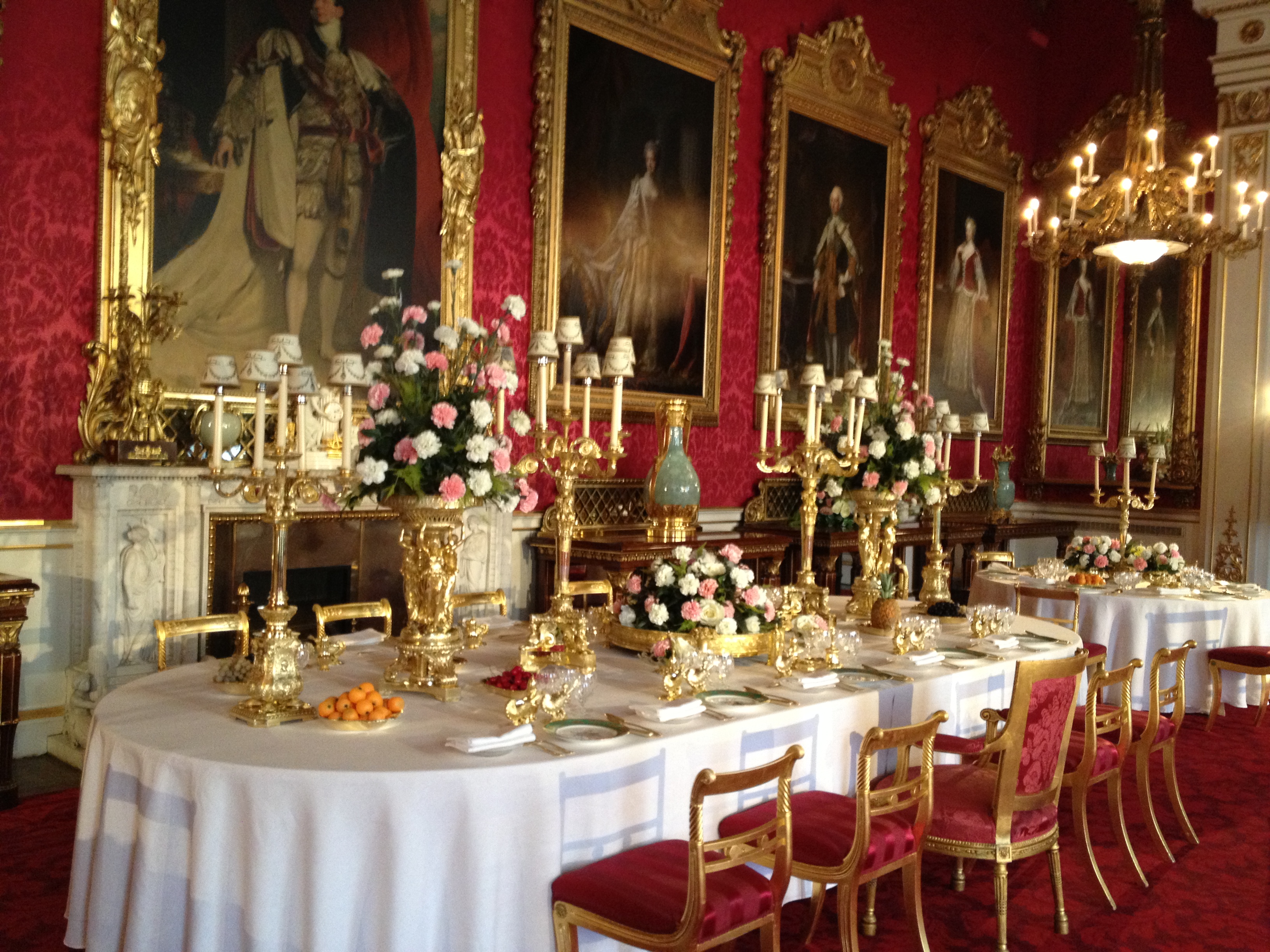 CELLOPHANELAND* were guests of Buckingham Palace and the Royal Collection Trust.