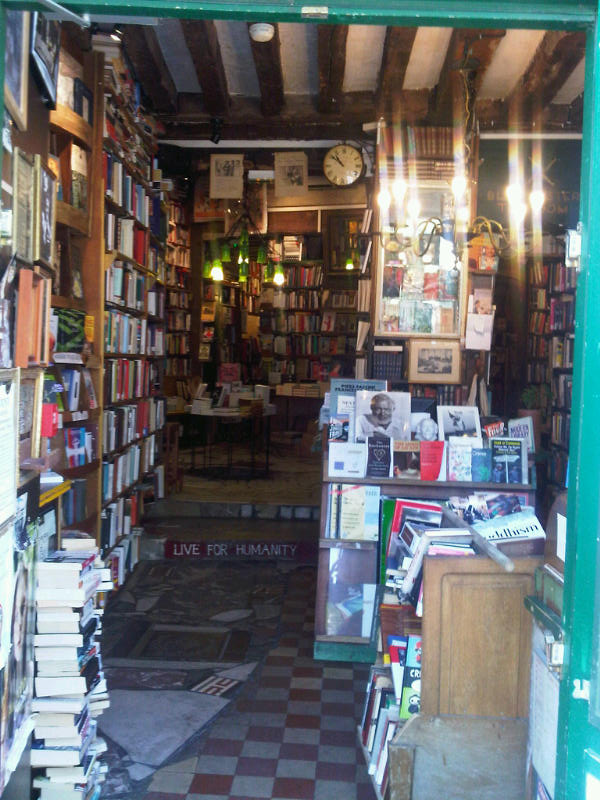 – Be not inhospitable to strangers, lest they be angels in disguise –

I first fell in love with Shakespeare and Company – the mythical English-language bookstore on the Left Bank opposite Notre-Dame – as a student, and now every time I visit Paris, it’s usually my first point of call. And unlike many places one returns to as an adult, Shakespeare and Company has reassuringly remained the same over the passing years. Low ceilings, warren-like rooms, welcoming cubbyholes containing dusty typewriters, all still fragrant from the proximity of ancient books.  It has always been a haven for writers and bibliophiles.

The bookshop was originally established by Sylvia Beach, an American expatriate from New Jersey,  in 1919 as a lending library as well as a bookshop, originally at 8 rue Dupuytren and then later moving to 12 rue de l’Odeon, where it remained until 1941. It was a magnet for writers and artists such as Ernest Hemingway (who mentioned the bookshop in A Moveable Feast), F. Scott Fitzgerald, Man Ray and James Joyce. Visitors could buy or borrow books such as Lady Chatterley’s Lover (at the time banned in England and the US). In fact Beach published Joyce’s book Ulysses in 1922 (similarly banned in England and the US). During the occupation of France during World War II, Shakespeare and Company was closed down. It is alleged the store was shut because Beach denied a German officer the last copy of Joyce’s Finnegan’s Wake.

In 1951, an American George Whitman opened another similar bookshop at 37 rue de la Bucherie, a former 16th century monastery and its name was soon changed to Shakespeare and Company resurrecting Beach’s original concept. During this period, Beat Generation writers such as Allen Ginsberg and William S. Burroughs often visited.

Whitman’s daughter, Sylvia, nows runs the business and there are regular poetry readings, writers’ meetings and even Sunday tea. Sylvia has also started a biennial literary festival and in keeping with the tradition of Shakespeare and Company, welcomes young writers to live and work in the shop. Yes, this is a bookshop with beds! George Whitman claims that as many as 40,000 people have slept here over the years. We remained until 11pm (closing time) but on this occasion, resisted the temptation to bed down with a good book!