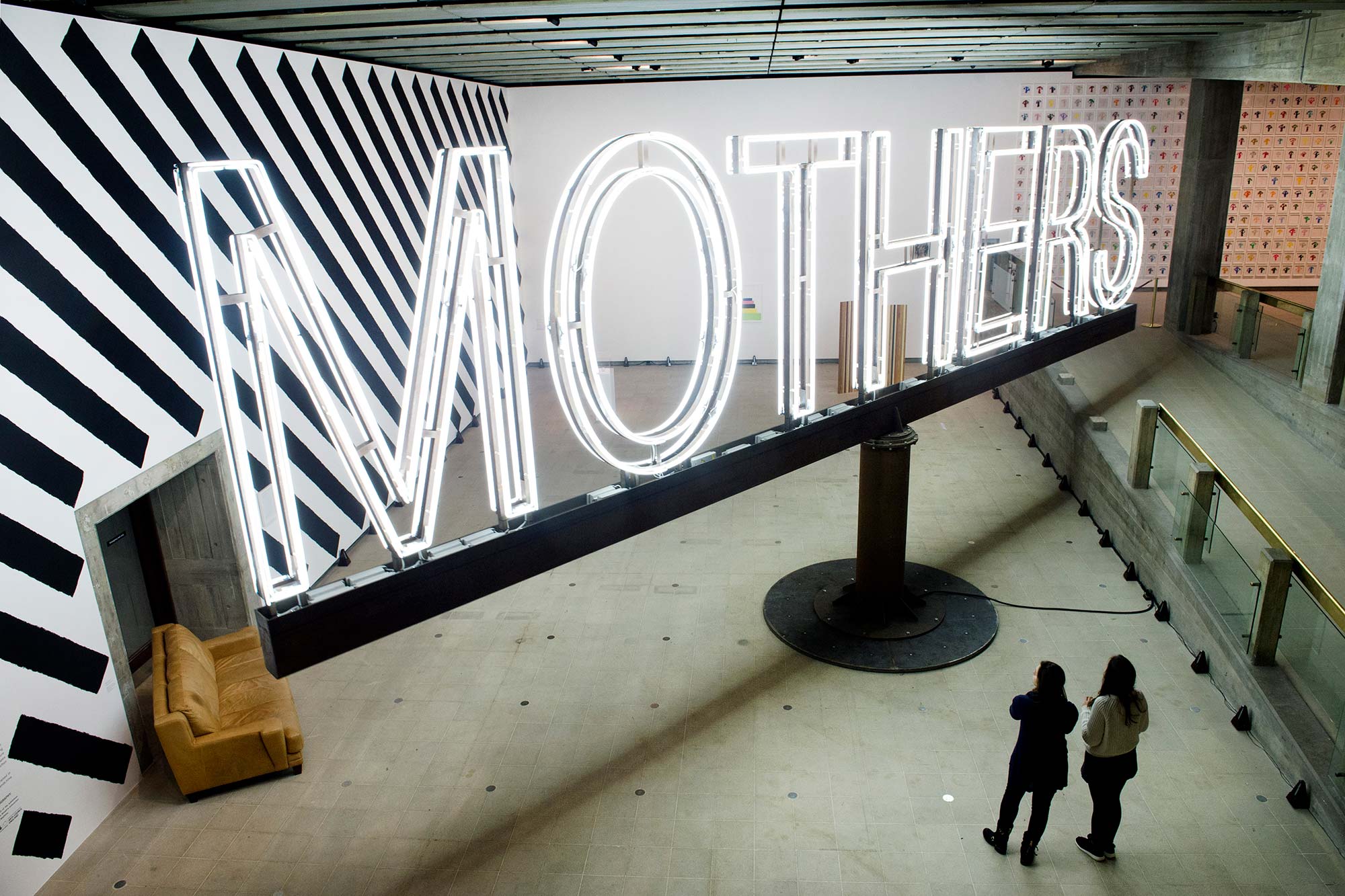 The knowing title of Martin Creed’s solo show at The Hayward, What’s the Point of It? offers an immediate hint at the content whilst also suggesting a potential response. This is undoubtedly an exhibition that will split the audience somewhere down the middle in a ‘Marmite’ reaction of love and hate.

A piece of blu-tac pressed against the wall, a screwed up ball of paper, cardboard boxes piled ziggurat-style and a row of nails are examples of some of Creed’s works, each carefully and sequentially numbered and to which the titular What’s the point? will clearly often be directed. One soon realises that Creed, too, is asking the same question of himself and probably life in general.

Our last encounter with Creed was at a lecture – the word ‘lecture’ in this case being a very loose description of what took place. He decided to start with a guitar accompanied song. For twenty minutes, in true comic style, his hand hovered over the strings of his battered instrument, before frustratingly moving away as he drifted off in to a random point, reminiscence or story. The song when it eventually arrived was short, minimalist and funny.

The exhibition is very much like the song and its build up: Creed’s has a hesitant and agonised interaction with a modern life that for him seems simply too complex and disordered – he struggles to bring order to this troublesome chaos – and eventually produces something quite simple, thoughtful and often amusing.

This quest for order is the source of his numbering system, too. Here’s what he – hesitatingly – sort-of – had to say about that for the Tate Magazine:

Yeah… I started numbering the things I made… because I wasn’t happy with some of the titles that I’d used, and I just wanted a way for them all…and, aye, I didn’t want titled and I didn’t want untitled… I wanted a way to try to treat them all the same whether they were a big thing or a small thing or a piece of music or whatever…and I like numbers… It’s difficult to start, I mean it’s often difficult to begin things… and in that respect numbers can be very useful. I mean one, to me, is a good start, and to continue, two’s good too… but… aye, it was to try to treat things all the same and… eh, not worry about titles, not worry about words… I just, you know, the numbers, you know the numbers, I don’t think they’re a particularly important, eh, thing, because basically all… many… most things are numbered, you know, with catalogue numbers or serial numbers… (read the whole interview here)

Decision-making for Creed is similarly agonisingly difficult and behind each work is an extended process where he attempts to decide by ‘not deciding’, or selecting by ‘not selecting’.

Piled boxes are stacked in decreasing sizes, nails in size order are hammered in the wall, a piano is played note by note up and down the keyboard in never ending arpeggios. Supermarket packets of brushes allow Creed to paint his trademark pyramids without the need for him to select brush sizes. For other artworks he picks every different size of ball, every colour of tape and a sequential array of cacti – each to avoid ‘choosing’.

The process brings its inevitable hits and misses. The best, seen upon entering the exhibition, is a vast and rapidly spinning neon. Spelling MOTHERS it is mounted on a huge iron girder as big as the room which threatens to decapitate anyone much over six foot tall. Mothers were of course dominating, protective and big in Creed’s childhood mind and the work here is equally intimidating. Another success is a reprise of Half the air in a given space (work 360) – a room half filled with balloons that is at the same time claustrophobic and exhilarating.

As one would expect of an artist with a band and a cd release to coincide with the show there is plenty of sonic accompaniment too.  The ticking of dozens of metronomes each set at a different rhythm is the background to MOTHERS whilst there is the piano, ascending sounds in the lift, and sniggering laughs outside the toilet.

This is effectively an all encompassing tour of Martin Creed’s singular mind – in sound, light, paint and experience – that is in turn, thoughtful, amusing and provocative. Love it or hate it, this is a show that deserves to be seen.

Martin Creed: What is the Point of It at The Hayward Gallery, Southbank, London until 27 April 2014