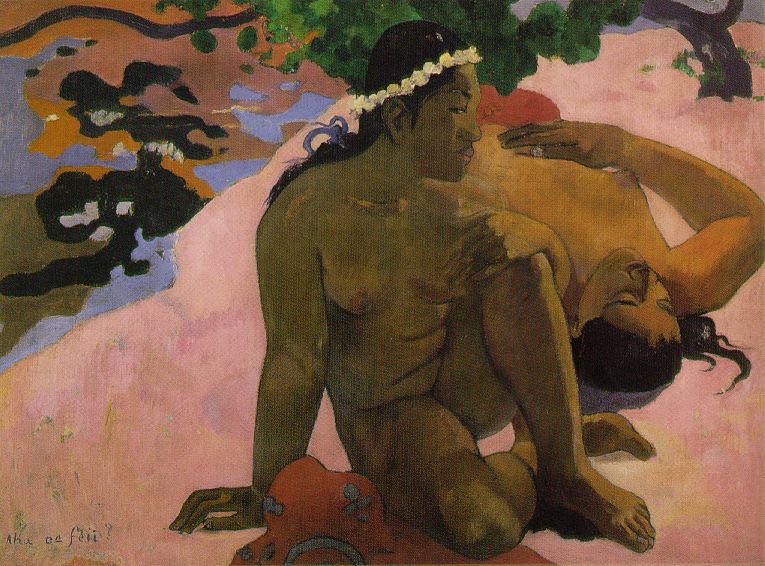 Words are an integral element in Gauguin’s work and we firmly believe that’s why he has always been one of our favourite artists. Long before Warhol boldly decorated his canvases with letters of the alphabet, Gauguin would choose fragmentary texts as titles, either painted directly onto the canvas or carved into the frame. He explained that his paintings involved a ‘musical part’ – their composition, lines and colours – and a ‘literary part’ – the creation of a story that justified his aesthetic decisions. Choosing titles for his paintings was an essential part of the whole process. For example, several of his Tahitian paintings are titled with questions including ‘Where are you going?’ and ‘Are you jealous?’ hinting at developing dramas within the frame.

Gauguin: Maker of Myth which opens tomorrow at Tate Modern, aims to take a fresh look at the world of Paul Gauguin (1848 – 1903) by focusing on myth, storytelling and the construction of narrative in his life and art. It is a majestic exhibition which explores his career firstly as a stockbroker, an Impressionist painter, his travels to remote corners of the globe as well as shining a spotlight on his activities as a writer/journalist and his love of literature. (We were especially thrilled to learn that he was a fellow lover of Rimbaud!).

Bringing together works that were produced in Paris, Brittany, Martinique, Tahiti and the Marquesas, there is the familiar dazzle of the Polynesian paintings alongside much earlier works depicting Gauguin as a family man at home in Montparnasse. Here he appears with his wife and two small children just before the stock market crash that persuaded Gauguin to abandon his career in finance and become a full-time artist.

Gauguin’s work drew upon a wide variety of visual and literal sources, including classical sculpture, popular prints, caricatures, non-western art forms, anthropological texts as well as the Bible.  All can be experienced in differing degrees. Woodcarving which had been a pastime of the artist since childhood was represented most memorably. Two pieces in particular – a pair of wooden clogs which the artist had carved and the beautiful wooden box in which he stored his paints and brushes – were incredibly touching.

By the time of his death in 1903, Gauguin had gained, and no doubt honed, the reputation of rebel, artistic innovator and libertine. In 1901 he moved to Hiva-Oa in the Marquesas, one of the most remote island groups in the world. He was determined to provoke his neighbours, particularly the Catholic bishop, and so carved the words ‘Maison du Jouir’ or ‘House of Pleasure’ into the eleborate lintels which he had made for the entrance to his home. Impressively the original large carving is included in the exhibition. It seems fitting that Gauguin’s last act of rebellion and humour involved not paint but words.

Recommended reading: Gauguin His Life and Works in 500 Images. To purchase visit our bookstore.

All images by Tate Modern.