We couldn’t make last week’s press viewing of Fashion Rules at Kensington Palace, so took the opportunity yesterday, to spend an idyllic summer’s afternoon strolling around the palace and grounds. This new exhibition showcases gowns from the collections of HM The Queen, Princess Margaret and Diana, Princess of Wales.

By the very nature of dividing the dresses into three separate areas, across five rooms, the rules of that particular period in fashion become abundantly clear: a nipped-in waist in the 50s, short skirts and diaphanous fabrics in the 60s and 70s, and sparkles and shoulder pads in the 1980s. These were the fashion rules that people dressed by, even members of the Royal Family.

The 21 couture dresses featured, represent a nostalgic look back at the wardrobes of three royal women in their respective fashion heyday, and how they each reflected the style and trends of the day.

Here’s a glorious example of that 50s nipped-waist. The silk organza dinner gown was designed by Hardy Amies, and The Queen wore it on a tour of Canada in 1959. We adored the pink silk, spangles and bugle beads all fashioned in a mayflower motif, the province flower of Nova Scotia. And hopefully you can just see the exquisite pink silk ribbons running down the back of the dress. A beautiful example of fifties femininity. 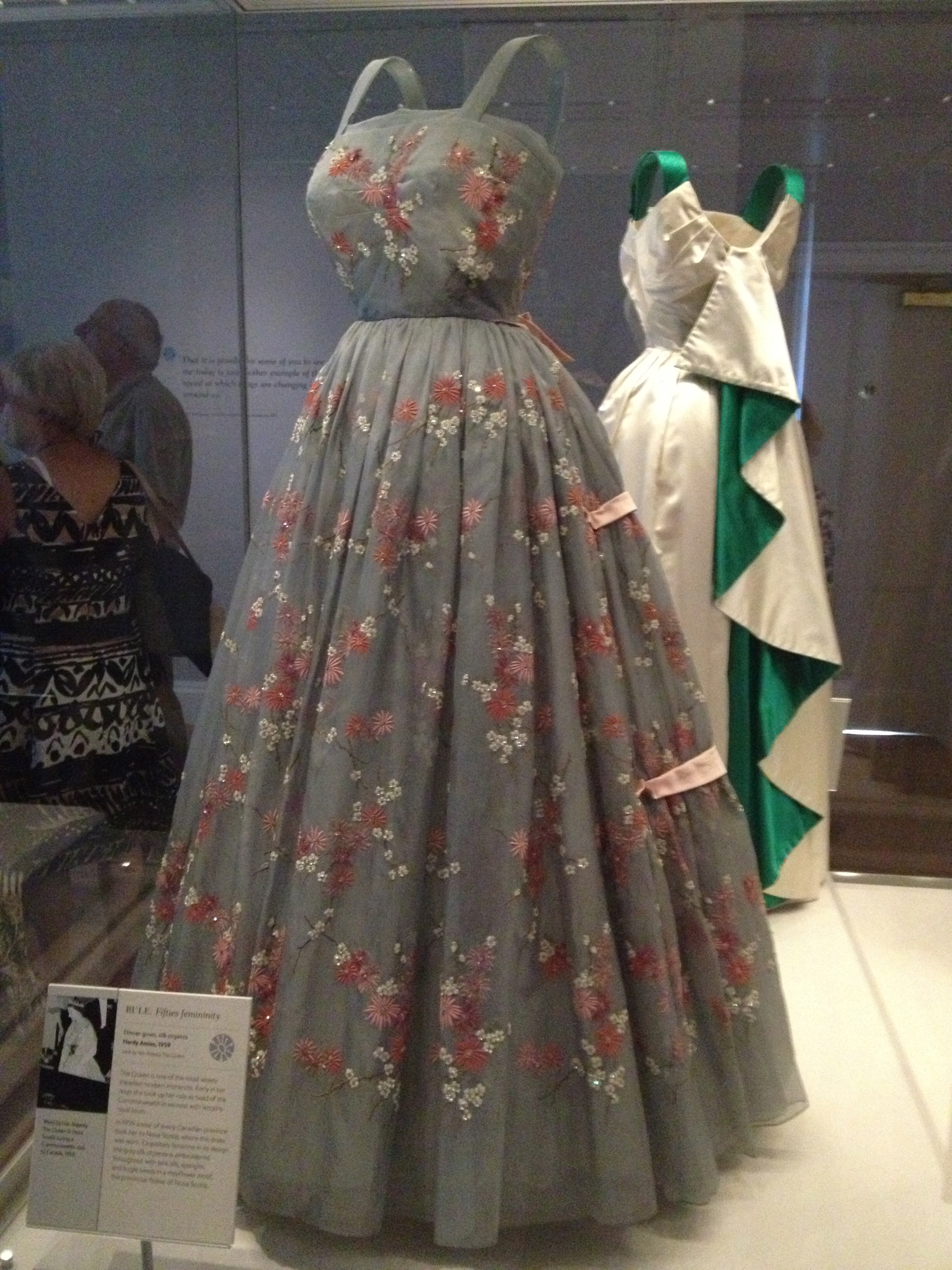 The young Princess Margaret followed fashion closely and her style was widely imitated. She wore short Quant-inspired dresses, loved bold bright colours, and also experimented with the vogue for ethnic clothing. Her wardrobe from the 1960s and 70s has never been displayed before.

Whenever you think of caftans and turbans, Elizabeth Taylor and Princess Margaret both spring to mind. During the 1970s, the Princess regularly wore both. This silk ensemble was designed by Carl Toms in 1976, using luxurious Indian sari silk for a fancy dress party held on the island Mustique. 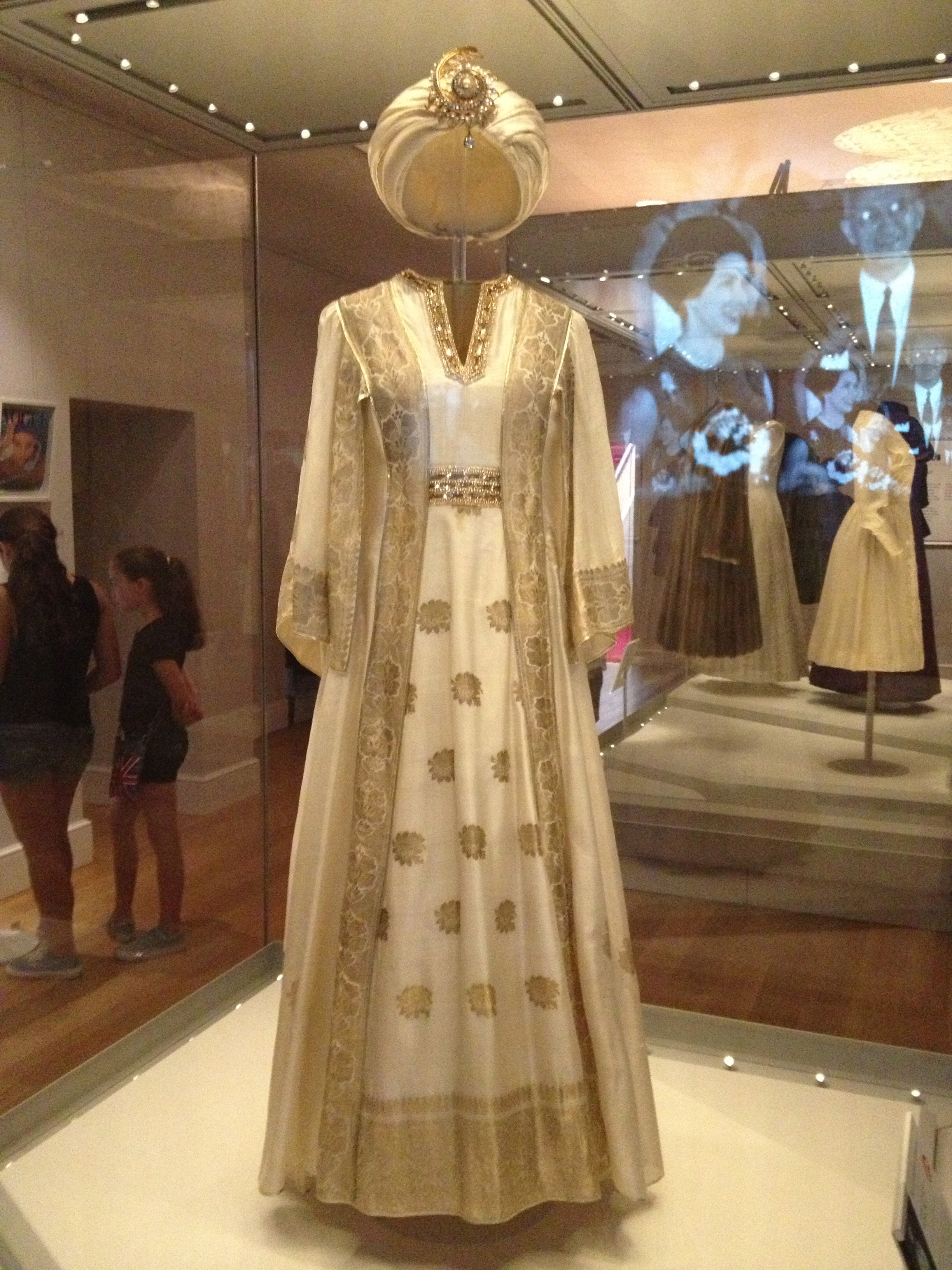 Upon entering the Diana room, and seeing her adventurous signature look of the 1980s: frills and shoulder pads to asymmetrical shapes and bright colours, you realise that at the time, she must have almost single-handedly revived the flagging British fashion industry. Such was her power of her public image. 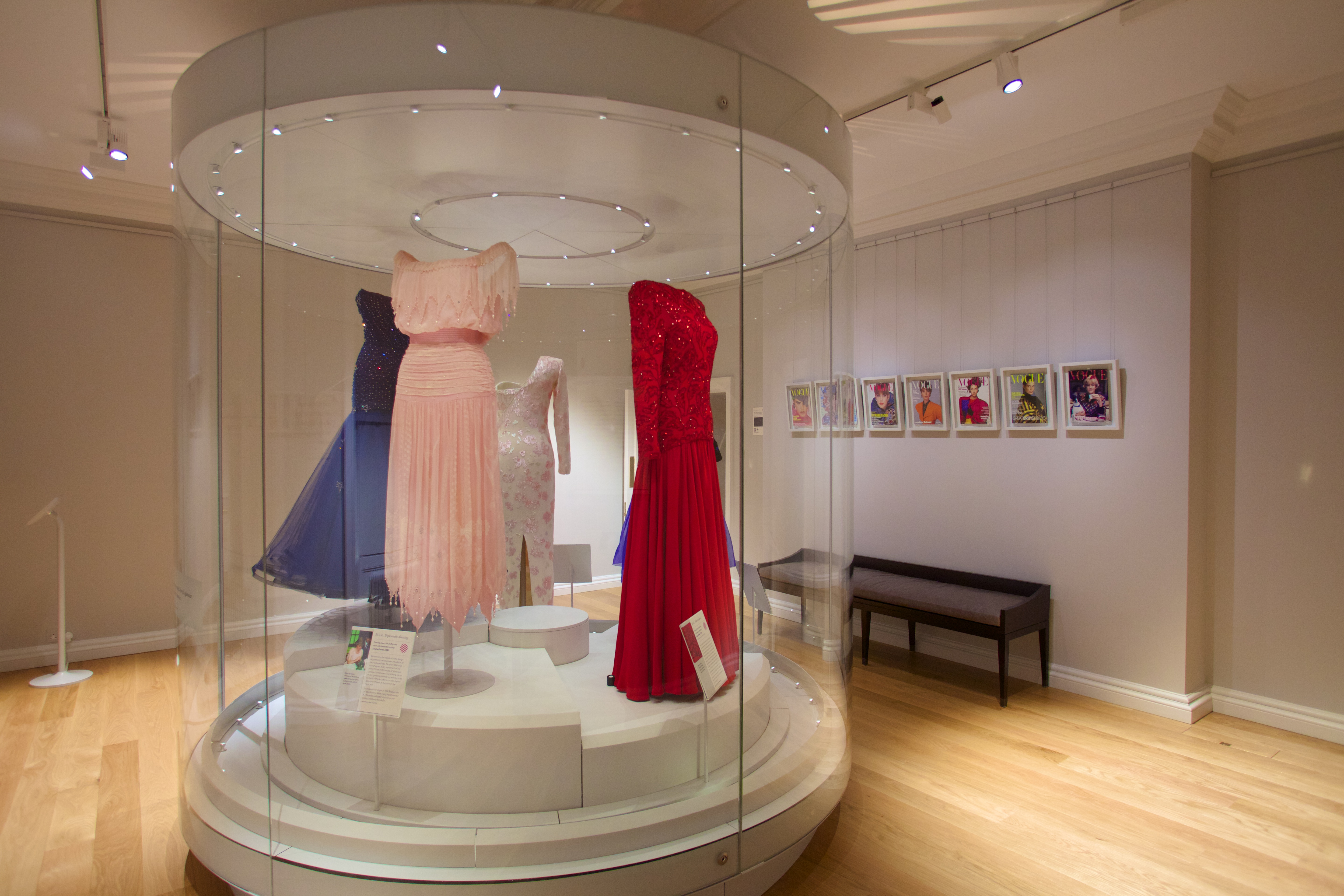 This silk chiffon gown, designed by Zandra Rhodes in 1985, was worn by Diana on a royal tour of Japan. The delicate shimmering pink colour references the cherry blossom in flower at the time of the visit. This is diplomatic dressing at its finest. 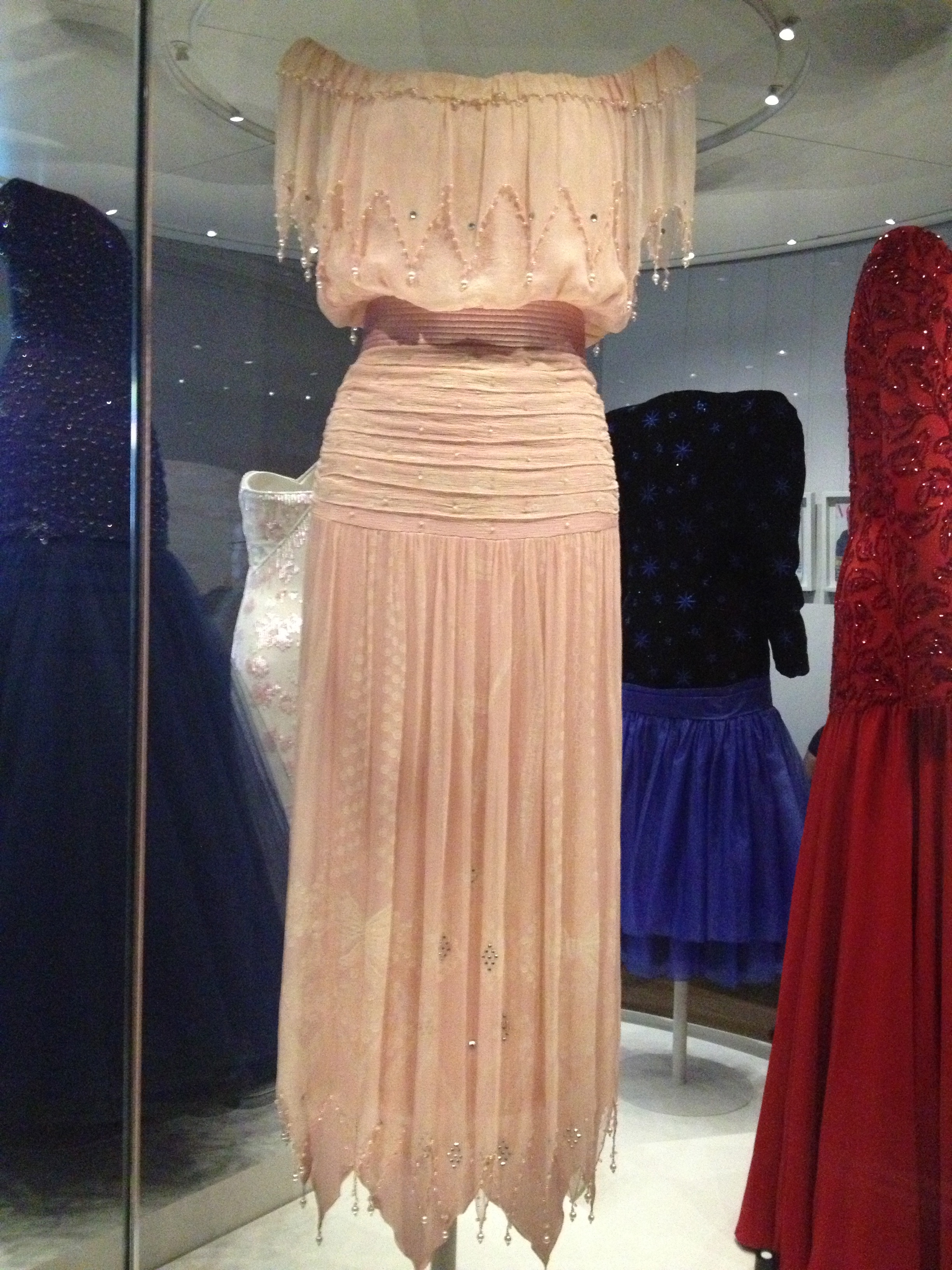 In addition, there’s some really fascinating scene setting footage of the times in which the gowns were worn. In one room, Princess Margaret is seen chatting to The Beatles, in another, Princess Diana is meeting the 80’s equivalent: Duran Duran.

We especially loved the mounted Vogue magazines which ran along the walls, depicting fashion from across four decades. 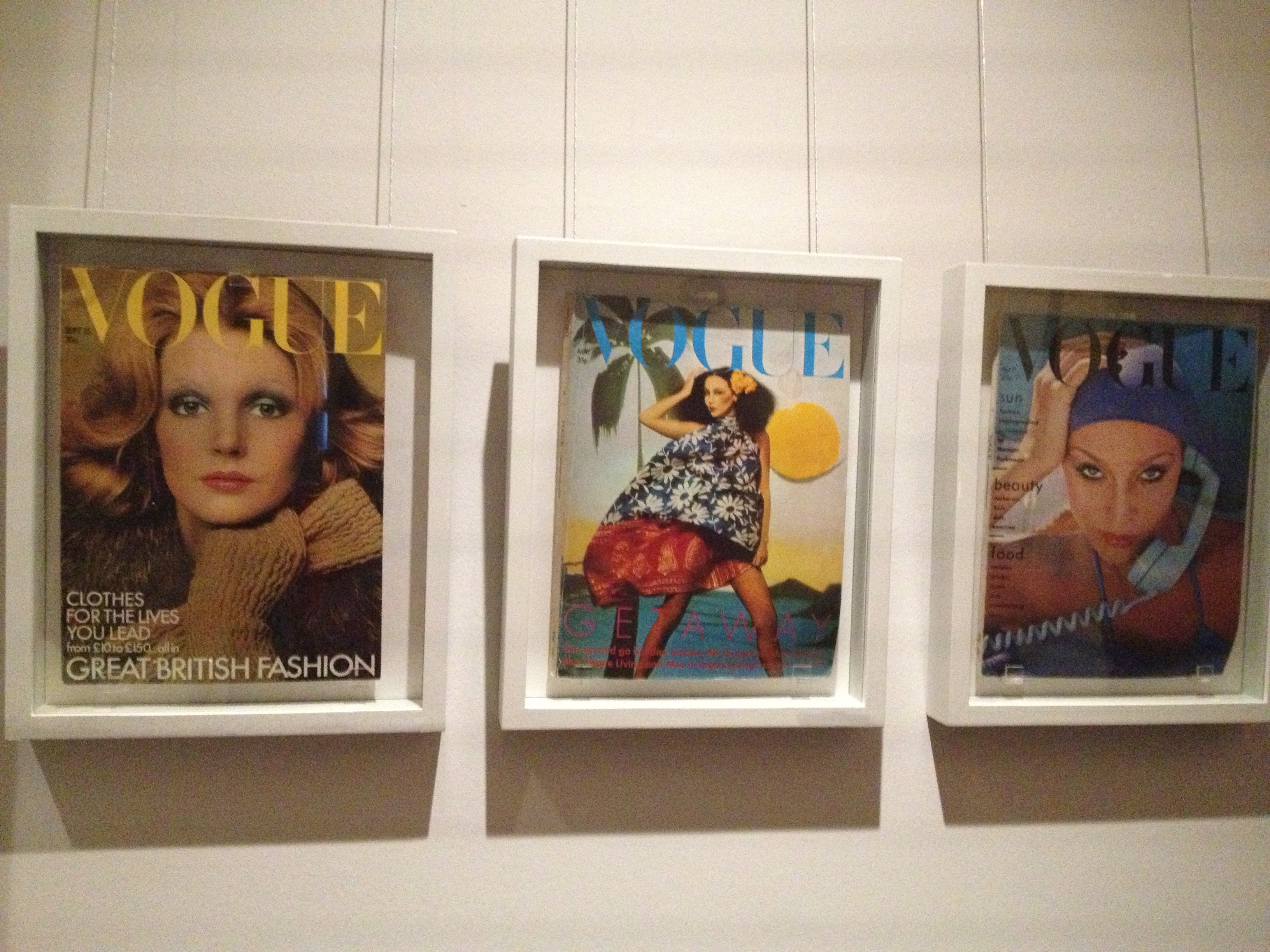 All images by CELLOPHANELAND* and Kensington Palace.