The oasis of High House Gallery, lying within the Cotswolds contemporary art desert, has come up with yet another excellent exhibition. Their latest is a solo show from emerging Spanish photographic artist Antonio Marguet, selected to complement the new Photo Oxford fair that runs over the same period.

Whilst Marguet has a background in fine art, his works bring together a remarkable range of interdisciplinary skills. He carefully constructs highly theatrical re-presentations of nature and forms by using an eclectic selection of artificial props. 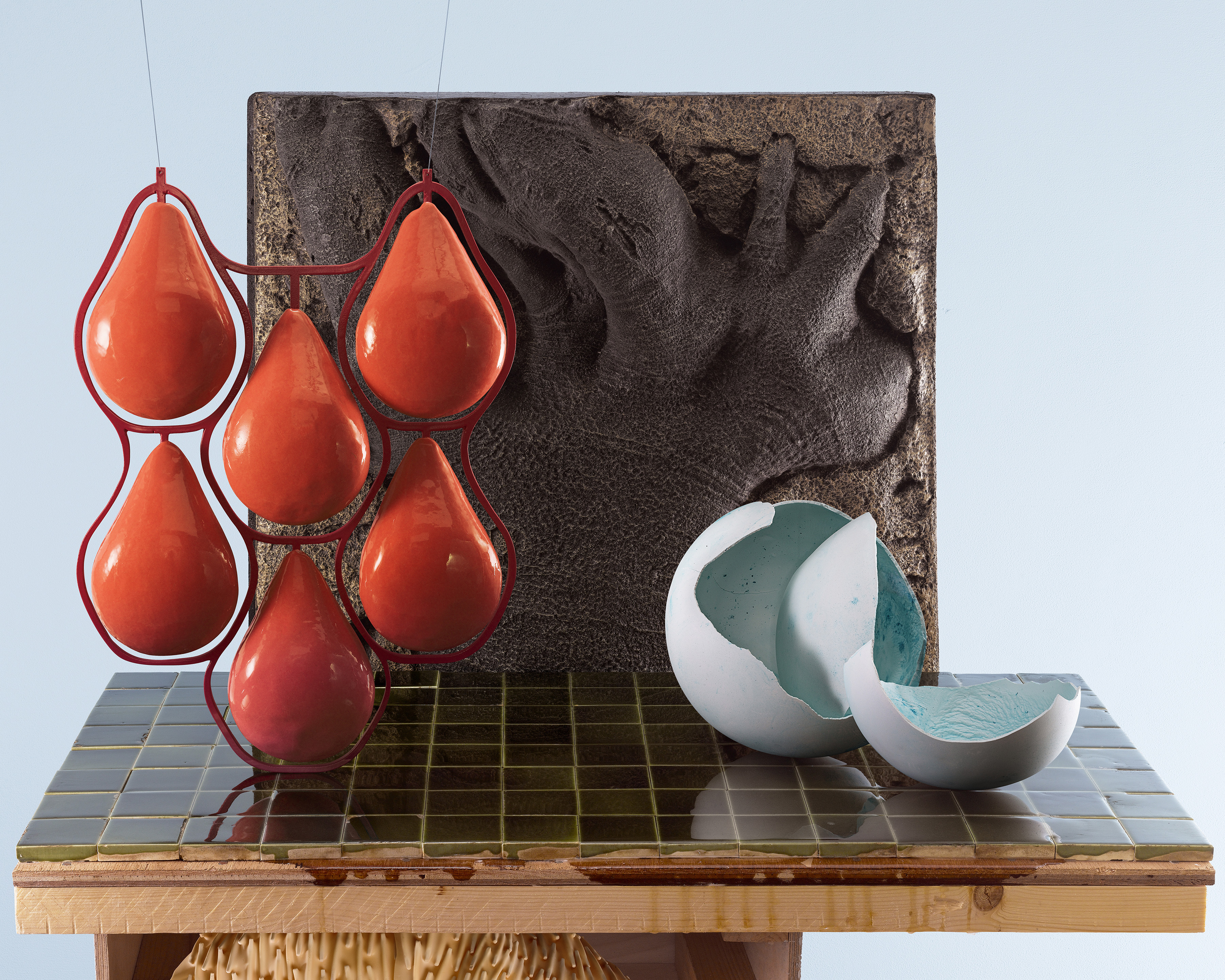 At least part of the pleasure in examining his colourful work lies in the attempt to work out precisely what materials have actually been used. Uncontaminated Bites (2013) for example features a cute pink plastic hamburger-like object with a mustardy-yellow filling that sits adjacent to a balanced and embossed red form. They both stand before a primal and earthy brown mass that looks like (but surely is not) solidified mud. All sit on a mosaic of bathroom tiles.

Other works feature egg-like organic forms in red or blue made from very inorganic-looking materials, assorted frames and block of unidentifiable plastic or foam. Much is made to fit the artist’s imagination, but if sundry objects gleaned from shops and market stalls fit the bill then all the better – not even a worn kitchen dish brush is safe from inclusion in one of Marguet’s unique constructions.

Bizarre and witty captions offer an insight into the thought process behind these striking candy-coloured arrangements: Pending Marshmallow in a Seascape, Postmodern Nude and remote Crocodile Tears are examples…

The delightful range of colours and textures presented within the images immediately invites a tactile response which is firmly denied. These sculptural installations are captured as images before being destroyed. The photograph ultimately therefore becoming the only remaining record of the object. We are left to examine and consider – our imaginations can run wild.

Working at the boundary between sculpture, installation and photography Marguet is fascinated by the use of props and surrogates. Images become objects, the real is concealed and the photograph becomes a mythological or fetishistic object. 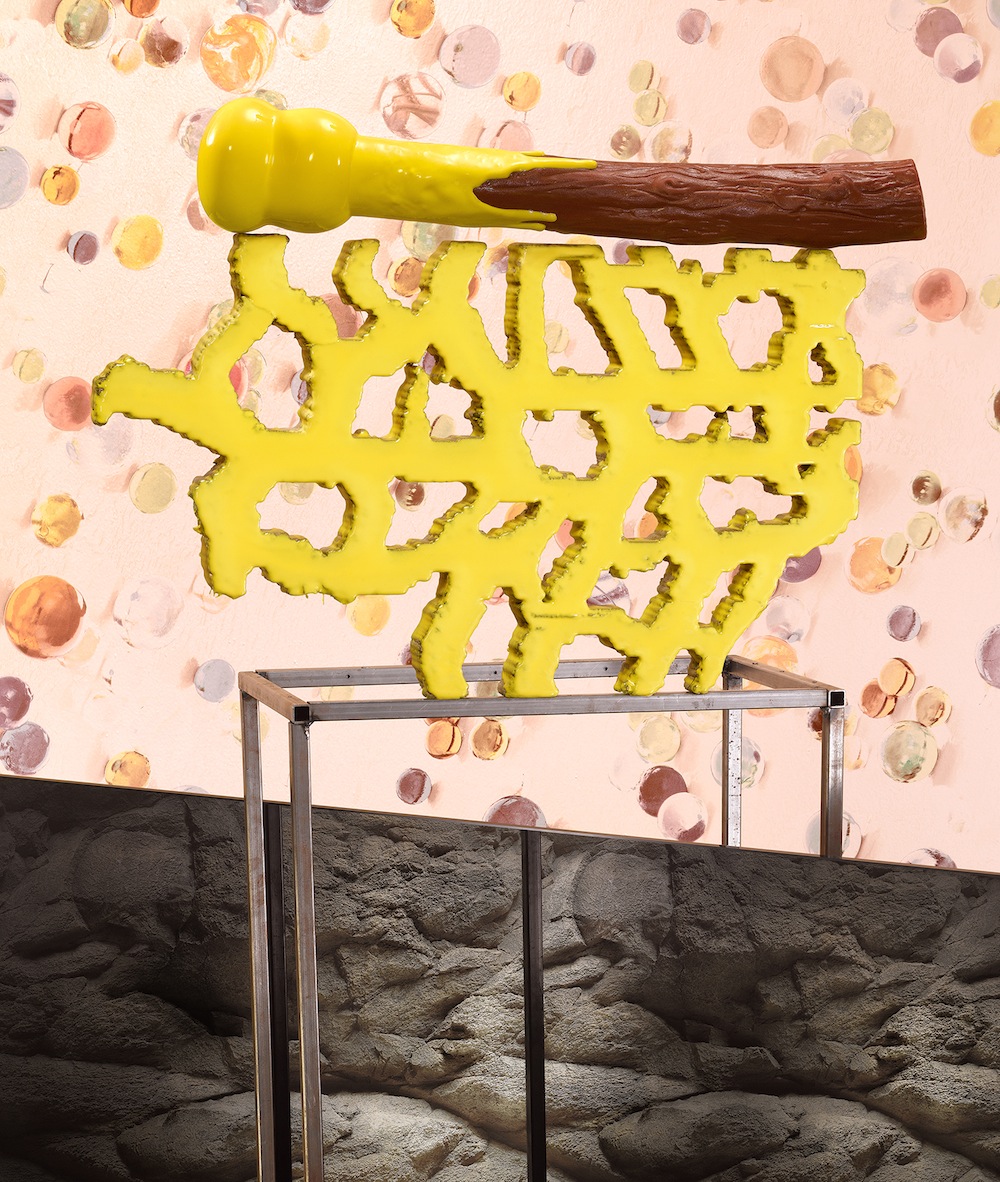 Marguet notes ‘Where the image as an object is used to replace or resemble a real thing is what interests me. In particular, I am fascinasted by the implications on how the image become a fetish. Pointing to certain phantasmagoria questions the image as instrument and as a methods of concealment, by which the ‘real’ is hidden and transformed into illusory appearance.’

The particular series exhibited is entitled Toenail Constellations referencing the notion of self-absorption and projection into a deep space of immensity and fantasy. The ‘toenail’ working as a metaphoric surface which is connected to the local, familiar and intimate. Familiarity and strangeness combine.

Marguet’s work has received widespread recognition including selection for the highly respected Catlin Guide and as a Saatchi ‘New Sensation’. On this evidence more well-deserved acclaim and recognition is sure to follow.

The exhibition is at High House Gallery until 5 October 2014.